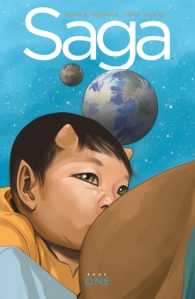 The Short Version: The inhabitants of the planet Landfall and its moon Wreath have been at war for as long as anyone can remember. But when two soliders fall in love – the very epitome of star-crossed – and have a child together, this strange new family must go on the run from bounty hunters, robot royalty, and all kinds of other astonishing space-things.

The Review: This series first crossed my radar a little while back, when I saw the third volume out in paperback at Strand.  Something about the cover grabbed me but I never ended up finding a copy of the first volume – but then I saw this beauty of a tome.  Collecting the first three volumes of the story (some 18 issues) into a single baby blue hardcover, I thought “hmm, I could pick that up with Christmas money.” And then it showed up on my doorstep the other day in a package with no return address.
I still don’t know how it got here – but a thanks goes out to whoever did send it, for whatever reason.
Because this is exactly what I needed.

I tend to, despite an enduring love for it, be pretty picky about my sci-fi. As a kid, I was pretty omnivoracious about fantasy but sci-fi was held, for whatever reason, to some kind of inscrutable standard.  Hell, I still don’t really know what it is except that it should be as fun and inventive as fantasy – for I’ve only recently realized that the two are meant to be shelved together in stores (that was a big soapbox for me as a kid). See, they both create worlds that exist beyond or outside of our own (or at least adjacent to) – and any sufficiently advanced technology can be perceived as magic.  They have a lot of connection to one another, these genres, and maybe that’s what really nabbed me about Saga: there’s magic right alongside sci-fi, inextricably intertwined.

The world-building here, much like with the success of those first Star Wars films and Guardians of the Galaxy and Dune and the like, is what really sets the series apart. Vaughan and Staples create a vivid sense of this galaxy-spanning conflict with just a few strokes of the pen (whatever that pen might be creating). Right away, we see that our heroes (Alana and Marko) are different species and that they’re having a baby – and that they’re in trouble.  Straight off, there’s a lot going on but dropping us in media res like that forces us to immediately shut down whatever questions we might have about the world(s) at play: we will learn as we go along, because the story won’t wait for us.
And learn we do.

The series is brimming with invention. I’d love to talk to Vaughan specifically about what he’s doing here conceptually (although I’m sure Staples has plenty of interesting takes on it as well), because he’s pretty much just giving life to any old idea that floats into his brain.  The people on the planet have wings, the ones on the moon have horns and magic.  There are tons of other species, including a wickedly harrowing couple of creatures that are straight out of the deep recesses of my nightmares (but even they need love, which is a wonderfully bold statement on the part of the authors).  There are even these robot royalty people – their actual position in all of this is a little unclear; they don’t seem to rule anybody on either side of the conflict but they’re involved? It’s unclear but also it doesn’t really matter: you get that they exist, that they are pretty much humanoid except they have TVs for heads, and they look damn good in military finery.

But, as with Sandman and Transmetropolitan and so many other excellent graphic novels, the pretty packaging and the cracking story aren’t all.  There’s a cultural message to be delivered within these pages as well – several, in fact. Pretty much every thing that might make a right-wing nutjob go crazy, you’ll find in these books: interracial (hell, interspecies) marriage and romance, the interruption of a free market economic transaction, sex slavery, war itself (not to mention violence, pacifism, gun control, etc), unions, homosexuality, drug use, space travel, magic, and so on.  And Vaughan’s universe, different as it is from our own (or at least I assume – that might be a false assumption), isn’t so different at all: they’re all trying to deal with these issues as best they can. So, yes, in light of Ferguson and campus rape and school shootings and race-baiting and gay-bashing, it’s hard not to draw some parallels between our daily lives and this fantastical story of a couple who fell in love and just want their child to be safe.

A character at one point explains that the opposite of war isn’t peace – “peace is just a lull in the action,” he says. Wanna know what the answer is? It’s fucking. Or, as those damn East Village bohemians said it in RENT, it’s creation. And when Alana and Marko argue, you see that that’s true: they bicker with each other about all kinds of things, coming as they do from different backgrounds and having different outlooks on life (Marko, the dude, is the pacifist and Alana the one reluctant to give up weapons – another nice switch from our society’s annoying and outdated ‘norms’), but they love each other fiercely and, as Alana says early in the book about an argument, “that’s how this happened” – this being their daughter.

Rating: 5+ out of 5.  Just an absolute blast.  I could go on and on about the joys of this book – what’s another thing I haven’t mentioned yet… the scrawled narration, in a different font? the humor? the heartwrenching violence? – but let it suffice that they are all just freakin’ great.  It’s a big ol’ sci-fi adventure, written with joy and imagination.  Just what the doctor ordered.
Of course with a title like Saga, we have to realize that we’re going in for the long haul.  The first issue came out in March 2012; it’s now December 2014.  I know, I know, I could pick up the individual comics themselves in order to stay in the world of the story… and who knows, I might do it.  Come back and get the big book(s) later on down the road.
And for the first time in a very long time with a serialized story, I’m tempted to do it.  The breadth of this story is breathtaking and in the two hours it took me to burn through the entire collection (seriously), I was as giddy as a kid watching The Empire Strikes Back – or, frankly, as a 25-year-old watching Guardians.  Goodness but I want to live in this wild, lurid, crazy, beautiful world that Vaughan and Staples have created.  It is that cool.