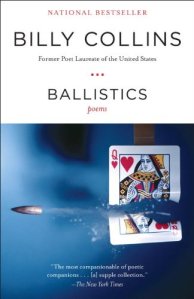 The Review: Billy Collins is the sort of poet who you read even if you don’t like poetry.  That can sound like damning with faint praise but I assure you, it’s not: rather, it means that the man writes poetry that can make even the most hardened verse-hater crack a smile or slow down for a moment.  His popularity is not due to his being a simplistic poet but rather to his being just a really damn good one.  In fact, he’s so good you might wonder why other poets don’t do it this way.  But they can’t, because they’re not Billy Collins.

The collection, as with any collection (short stories, poems, etc etc), has sections that are better than others.  And the truffle problem raises its head more strongly here than it might in collections of other types of writing, for poems are meant to be savored.  So, that’s what I did with this collection – and that’s why it took me nearly a month to read 56 poems over 110 pages.  It’s deceptive, of course: you figure you can knock out a collection like this in an hour or two.  But it’s Collins’ way with words that makes you, almost every individual time you dip into a poem, slow down and let the experience of reading the thing breathe around you for a moment.

I guess the best way to put that would be “calming” but that, too, is a disingenuous term.  For while some of these poems do have a calming, reflective, considered bent – in the way that we (the relatively poetry-less masses) assume poetry must always do – there are plenty of others that burst like biting into a ripe peach or like the snort of laughter that causes a drink to fly from your nose.  “The Effort”, for example, is perhaps the best example of what makes Billy Collins so damn awesome: it’s both smart and silly, both serious and funny.  He begins:

Would anyone care to join me
in flicking a few pebbles in the direction
of teachers who are fond of asking the question:
“What is the poet trying to say?”

There’s a wry humor here, even in the language (the subtle near-rhyme of direction and question, the image of flicking pebbles) – but also an intelligence. Here’s an author themselves saying “hey, teachers, perhaps… perhaps it’s not about what I’m ‘trying’ to say but just what I am saying.”  Years after leaving school (where I often argued with teachers and professors about this very issue), I am so pleased to see such a thing – and to see it done with such a wry wink.

Perhaps that’s my favorite thing about Collins – and I’ve had the pleasure of meeting him, I should add, at the Public Forum in Central Park last summer (where he opened the evening reading a Markoe ode to Shakespeare), so I can speak a little bit to his actual presence: he has an impish joy about his work, a sense of something that I think can only accurately be described as sprightliness.  Even when he’s serious (and there are quite a few poems of marked seriousness, involving death and the loss of love), there is a twinkle in his eye – or perhaps most accurately a sense of simply reveling in the facts of life, whatever they may be.  He enjoys speaking to us as readers and fits the role of a Wilderian uncle: quintessentially American, but the sort of American that we all aspire towards, with warmth and uncommon intelligence and a passionate spirit.

Rating: 4 out of 5. Much as I talk about the steps I took to stay away from the truffle problem with this collection, I still found myself missing connections that I knew existed beyond the text.  Does this lost love correspond to that one?  What happened to make you so sad in this instance, Mr. Collins?  Were you writing this in one go or did you work on it, labor over it?  I find myself so full of questions that I almost can’t fully enjoy the work as it stands in this slim volume – but when I open it to nearly any page and read just that single poem… I am transported.  I feel the tension slip a little bit from my shoulders and the corners of my mouth tick up for the time it takes to read.  This is what poetry is meant to do – speak human to the reader. And Collins does it so damn well.