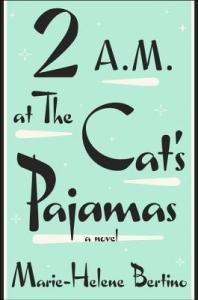 The Short Version: It’s Christmas Eve Eve in Philadelphia and three Philadelphians in particular are about to have the 24 hours of their lives. Madeleine Altimari, a brassy nine year old with a dead mother and distant father, just wants to sing; Sarina Greene (Madeleine’s teacher) is just back in Philly after her divorce; and Jack Lorca has just been told that he needs to pay 30k in finds to keep his club open.  And at 2 A.M., all three (and a whole host of others) find themselves at The Cat’s Pajamas where magic might just be in the air…

The Review: I grew up just outside of Philadelphia and I have a younger sister who you might consider brassy – she’s certainly blessed with gifted pipes and took no shit from anybody even at the pre-double-digit age.  And I love jazz.  So, yeah, you would be right (Christopher Hermelin, you are right) in thinking that this book is right up my alley.

It all kicks off with a quote from David Lynch that might well encapsulate the way I’ve felt about Philadelphia since, oh, before it was the cool place for the twentysomethings to go: “Yes, [Philadelphia is] horrible but in a very interesting way.  There were places there that had been allowed to decay, where there was so much fear and crime that just for a moment there was an opening to another world.”  Bit of a bleak epigraph for a book that literally sparkles in a turquoise deco jacket… but even in the midst of the beauty and wonder of this book, Bertino isn’t afraid to get her hands dirty.  Mark of a Philly kid through and through, right there.

The book begins a little fitfully, starting off at 7AM on December 23rd and spinning forward with timestamps til 7AM the following day.  The first timestamp, 7AM, is a little fitful – we meet this young girl, Madeleine, who is way too cool for school at two-days-from-10-years-old and she seems unreal.  And it threatens to unbalance the whole book right at the start – but then, with one of those darkly hilarious acts of violence like when Regina George gets hit by a bus in Mean Girls, 7:10AM balances out the tone.  From there on, the reader is pretty much helpless to do anything but grin, laugh, cringe, hope, and otherwise be totally wrapped up in the book: it has a sort of charming way about it.
The prose is delightfully canted, just off-center in the best way, with beautiful turns of phrase bumping up against awkwardly depicted violence followed shortly by breathtaking simple magic.  Or mix up all of those adjectives and go again.  It’s an engaging read without a doubt, one that makes you think of your favorite just-before-Christmas moments when it’s dark early but the air is crisp and there’s a little bit of snow and everything seems magical.  This book captures that, captures its sheer otherworldliness and the inexpressible joy that comes from living in those moments.

Of course, we have characters who do live in those moments – and they’re a delight as well.  Madeleine, as I’ve already pretty much said, is awesome.  She starts off a little impossible and while a part of me wants to argue that she maybe isn’t exactly plausible even at the end, I also think I’ve known some girls who could easily have snuck out of their flats to go to jazz clubs at 2am on Christmas Eve.  Her rough and tumble mouth, Bertino’s unabashed admission that she’s a jerk, and that undeniable voice… well, they all add up to one of those rare young kids you hope you’ve known at least one of.  Lorca and his whole crew, the tired owners and band of the club, are all relatively stock but their hearts are in the right place and that means the world: they’re the ones who really give this story its most beautiful sense of longing.  There’s some resolution that’s, perhaps, a bit too tidy in the father-son storyline… but chalk it up to the magic of music.
Finally, there’s Sarina.  One of those lovely, slightly bruised female characters who might (under the pen of a lesser writer) get the whole book to themselves, she’s perhaps the realest of everybody in the book.  As such, there’s a worry that she might be the downer, the wet blanket.  But instead, she’s the beating heart of this novel.  The other plots don’t matter as much – whether or not Madeleine gets to sing, whether or not they get to keep the club… these things don’t matter as much as whether or not Sarina and Ben are going to have a magical romantic night or not.  Even from the very start, before we really know who Ben is or what his deal is, we just know that she’s going to end up having one of those adventures and we want it to go well for her.  Each time something goes wrong, whether here or in the past (and WHOA, that prom scene… man, fuck that guy.  Bad advice, bro.), we cringe and at the same time push forward saying “No, Sarina, it’s going to be okay!”
Because she is someone who we want to be okay.  Because she is someone who makes other people okay.  The opening few hours at school, where Madeleine quite rightly stands up for herself and quite wrongly gets expelled (minor spoiler but not really), is a testament to Sarina’s power: she is a beacon of goodness for Madeleine.  She’s just right, perhaps because she’s a little off-kilter herself.  Kindred spirits or something, you know?

I could go on about the background characters, about the smile that sprang (unexpectedly – I’m not a huge fan of my former metropolis) to my face several times as I read about places I knew or feelings I’ve felt.  And I could nitpick some things – there are two quick swoops into magical realism that surprised me: the first was lovely, but then nothing happened with it until the very end… when it was altogether far too magical to really fit with everything that’d just happened in the book.  I’ll only go so far as to say that that final turn is what lost the book a + from me – and, really, who cares?  It was so lovely to round out my year with.  And so: Rating: 5 out of 5.