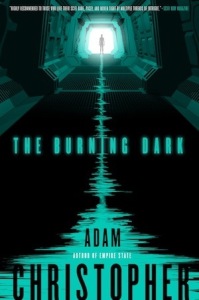 The Short Version: Humanity is stuck on the losing end of a protracted war with a strange semi-organic spider-machine race. Captain Ida Cleveland is one of the few heroes of this war. Out on the edge of the galaxy, a strange purple star burns with a lonely space station orbiting – and for some reason, Cleveland has ended up there. He finds a missing commander, irritable staff, and a lurking sense of something in the shadows…

The Review: I didn’t love Adam Christopher’s Hangwire – and as such, although he’s a popular and prolific writer whose every idea seems SUPER interesting to me, I’ve steered clear since that book. And the first couple of pages of The Burning Dark had me wondering if I hadn’t been right to do so: there’s something about Christopher’s writing that makes it difficult for me to latch onto the reading experience.  Honestly, I’m hard-pressed to say exactly what it is – except that both times I’ve read one of his novels now, I’ve found myself falling into a skim pattern because of the pace of the words, trying to slow down and let the story breathe in my mind but finding little purchase on the smooth face of the writing.

Still, I managed to get into this one – possibly because of the setting, possibly because it’s just a better novel than Hangwire – and found it to be a rewarding (if not tremendously special) experience.  The setting is cool as you can get: a strange star out on the far edge of the galaxy that emits a deadly purple light.  A common refrain in the book is “that star will fuck you up” and it’s quite true; things are not okay on the U-Star Coast City.  The commandant has disappeared and nobody seems to be willing to talk about that, a hero-officer has been shipped out there for his last tour of service and discovers his record has been wiped clean, the station is being stripped for parts and decommissioned (thus creating a slowly shrinking space, a sense of light claustrophobia almost creeping up on you), and it’s hard not to see things in the shadows.  Creepy, right?  Right up there with Alien, Sunshine, Event Horizon, and so on – those truly great derelict spaceship horror stories.
And the characters pretty much play into the classic roles of horror stories. They’re all dumb, that’s for damn sure – and I include our hero, Ida, in that assessment, even though he’s the one who was so smart that he managed to save a whole planet in the prologue. The fact that he doesn’t put together one of the ostensible twists… well, pretty much as soon as the character arrives in the story is embarrassing and doesn’t do much for my belief in Christopher as a writer. I mean, the reader figures it out pretty quickly – and then spends nearly the rest of the book waiting for Ida to figure it out, veering towards the “don’t go in there!” style of reader participation. It’s a little annoying.

The other characters are all exactly what you’d expect: the sexy but deadly warrior-lady, her brusque and troubled Black Ops partner, the wise-cracking troublemaking lady-chaser, the guy in command who won’t tell anybody anything, the randomly arriving celebrity… and they all play exactly the roles that you would expect.  Despite this, you do feel the tension building as the novel rolls forward.  People keep seeing things, you’re waiting for some nasty shit to go down… and then the horror of it all takes a back seat to the sci-fi adventure and we get a curious, somewhat-interesting-but-somewhat-head-scratching conclusion.  The ghosts who seemed to be appearing in the space station were interesting – a dead female cosmonaut, her own banishment from the record mirroring Ida’s, was especially compelling – but when we discover that they’re all [SPOILERS A-COMIN’]

actually some army of the dead coming out of another universe or something through a portal at the center of what they thought was a star (and I guess technically still is)… it all gets a little much. It was around the time that we suddenly, without warning or explanation, flash to a scene in what appeared to be colonial Japan – giving unnecessary and unexpected background into what was going on here – that I suddenly thought “whoa, wait, I’m sorry, this is what we’re doing?”  It rang hollow after the very enjoyable spooky stuff of the first 3/4ths of the novel and ultimately felt like a disappointing and all-too-weird ending.  I’ve just realized: it was kind of like a Marvel movie from Phase 2.  The first 2/3rds or so are an enjoyable movie by cool-director X (Shane Black, James Gunn, the Russo Bros) that then gets rammed into the Marvel continuity machine in the final act and so suddenly we get just explosions and plot stuff that, while important for the larger series, isn’t necessarily fitting with what’d just come before.  I know this is the first book in a series (trilogy?) that will get us more involved with the Spider menace – and I’m actually looking forward to reading more – but the sharp insertion of plot points that will undoubtedly matter later but that felt a little jarring at the time… well, it makes for some rough edges.

Rating: 3 out of 5. Although it’s a bit fitful to start, there are some good spooky jumps in this book and Christopher really nails the derelict space station vibe. And the crazy purple star thing is a trope that I enjoy the hell out of: space is a crazy place, so who knows what’s out there?  And the overarching story he seems to be headed towards (facing off with this intractable sentient-machine race) has be cautiously buying in… There’s a short story set in this same universe that I’m going to read, too (available at Tor.com).  I like the man’s invention if his writing isn’t always the most successful. And I wanted this to scare me to death – instead, it was just a pleasant post-ToB-reading reset.