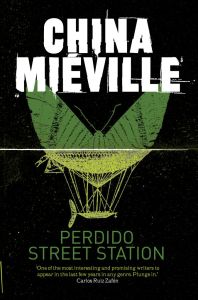 The Short Version: A stranger arrives in the city-state of New Crobuzon with a seemingly impossible request. And what begins as an ordinary scientist’s experiment unexpectedly (when he receives some contraband) swings into a terror that threatens to consume the entire city – a terror that invades your dreams on giant wings…

The Review: I’m on record as being a big Miéville fan – but his Bas-Lag sequence has been touted as his sprawling masterwork, a titanic trilogy that (in its own way) outshines the other standalone novels he’s written since. And when you put the three of them on a shelf together, any two of these are bigger than about any four other Miéville novels – so there’s a commitment here, but I urge you to make that commitment. I’m as wary as anybody about starting a massive fantasy sequence but this one, already, is worth it. The rewards are plentiful.

The one thing that unites all the Miéville I’ve read is the necessity for a reader to engage on a deeper level than just your usual reading. And I’m not just talking about being willing to sit through a whole lot of world-building – and there is, by the way, a whole lot of world-building here, but it’s so perfectly paced that it never feels like too much. New Crobuzon is a character in this story just as much as Issac or Yag or Lin or anybody else, so why not devote the same amount of character-building (see what I did there?) to it as you would to them?
Anyway, in addition to all that character/world-building, Miéville’s intellectual curiosity lands on… actually quite a number of things here but I think it’s safe to gather them all (or mostly all) under the umbrella of metaphysics. Psychic energies, dreams, consciousness, art and its role in our society/its ability to capture (or not) reality, even basic questions of human morality as seen from alternative perspectives… he’s tackling all of this and more.  And he doesn’t shy away from it, either: he dives right in and hopes you can keep up.

In fact, there are whole passages of the book that are devoted to intellectual debates about all the things I’ve mentioned above – and the one that is somewhat invented by Miéville, crisis energy, gets perhaps the lion’s share of the discussion. There are pages talking about this ostensibly fake theory of science (in a world where magic also exists, remember) that posits a third type of energy between kinetic and potential, a sort of liminal energy that encompasses both and neither at the same time. I’m not doing it justice; I found myself shaking my head at Miéville’s audacity and sheer megawatt brilliance as Isaac scuttles about working on his crisis engine, simply because my head was barely big enough to fit the ideas in a way that would allow me to both intellectually engage and also continue reading the book. I wanted to stop and debate these ideas with Isaac and his cronies, although I’m almost certainly not smart enough (and I’m not being self-deprecating here) to keep up. I wanted the plot to be put on hold while I stepped into the novel and learned more.
How often can you say that about a novel? I’ve, plenty of times, wanted to stop and explore a world (New Crobuzon absolutely gets added to my list of locales I will dream about visiting, right alongside Ambergris and Besźel/Ul Qoma and the Night Circus, etc etc) but I don’t think I’ve ever felt like the author was delivering intellectual engagement like this as well as world-building, all at once. Put it another way, I can’t remember the last time I wanted to stop reading in order to debate and discuss a philosophical idea with the characters. Miéville does that good of a job at engaging his reader with the ideas AND simultaneously making it all feel lived-in and real enough that the characters/world are present.

The book is also pretty much a masterpiece of plotting. Most books that head north of the 600 page mark falter at some point; it takes a lot to sustain a story for that long. But (in my edition) clocking in at over 800 pages, Miéville’s story does not ever really falter. The main antagonist of the piece (these terrifying slake moths) doesn’t even show up until 300 pages in: at that point, I was convinced that the story was going to be about the criminal underworld and the government and all these people trying to get ahold of Isaac and his research. And while that stuff does stick around, it’s only one facet of a very multifaceted gem.  It’s only once he’s gotten you comfortable that he introduces a whole new angle to the story and you realize that he’s taken the time – because that’s what it is: time-taking, care, patience – to build the world enough for his safety and necessity to then let the plot kick off.

And boy oh boy does it kick off. Suddenly, some bad shit is happening (pun slightly intended, for those who’ve read it) and it looks like nearly everyone is powerless to stop it. And yet Miéville’s imagination keeps churning: he’s not content to have made up all these things but he is gonna keep going, upping the ante, and making the receptive reader smile every time he does. My favorite moment of this comes at (as I recall) roughly the midway point, when he introduces two things with such ease that I laughed and put down the book and tried to explain it to my girlfriend and my dad (who happened, unfortunately for them, to be nearby). The short explanation is that the government of New Crobuzon, running out of options, decides to go to two possible sources for help. The first is the ambassador to Hell. And although this is one scene, playing out over only a few pages, it’s a near-perfect encapsulation of everything that Miéville does well: he introduces an idea, goes through it rigorously, and delivers with the perfect efficiency – whatever that might be for the moment. You trust the author so much that a simple explanation like “Usual rules in Melluary. Seven words, inverted.” just lands perfectly and you don’t need any more or any less: you are just right there with him and the characters.

The second introduction is that of the Weaver, an inspired mental creation in a book full of inspired mental creations. I should point out that I hate spiders (who doesn’t, really) – but even as I shivered imagining the Weaver, I was also entranced by it as a creation. It speaks in a strange flowing poetry, it’s a gigantic spider-creature-thing that can dance through dimensions and seems to have a mercurial, almost childish sense of entertainment about our world. The moments where it arrives in the novel gave me what I can only describe as glee, it is such a tremendous creation. And yet, when it is introduced, Miéville does the job of setting it up with a ruthless and perfectly-pitched efficiency, because at this point (around the halfway point of the novel) the reader is so attuned to his style and pace and what’s going on that he can drop in this otherwise-insane creation without anybody batting an eye.

Rating: 5+ out of 5. I could go on and on, because there is so much here – I haven’t even addressed the CI (the Bas-Lag version of AI), Motley, the deft and potent way Miéville addresses sexual violence via the garuda, the politics of New Crobuzon (corrupt, vaguely fascist government vs. secretly-printing-paper revolutionaries), ‘illicit’ love, and so on. Miéville drops about four novels’ worth of ideas into this book – and somehow manages to address them all pretty adequately. There’s nothing here where I think “oh, he really forgot about that” or “aw man, that was all?” – but instead, it’s all handled with brash intelligence and jaw-dropping confidence. If I hadn’t already decided it, I’d be deciding it now: Miéville is absolutely one of my favorite authors. I will read anything this man writes.