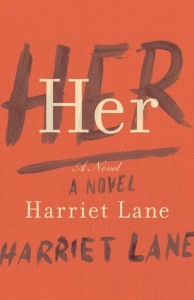 The Short Version: When Nina sees Emma, the shock of recognition is instant. But Emma doesn’t remember her and so Nina begins a new friendship, all the while worming her way into Emma’s life – with increasingly worrying consequences.

The Review: Despite all the trappings, this book leans away from (even as it falls into) being a thriller. The term “thriller” implies a certain amount of propulsion, implies that the reader will be “thrilled” – but Her is a far quieter novel than that. Perhaps a parent would feel different – but the moments of tension in this novel, largely relating to Emma’s children/her motherhood, are brushed broad. Even the final moments of the book, designed to slam the book home on a sharply open ending, lack the potency that “thriller” implies.

And for quite a while, I was thinking that this book was going to be a McEwan-esque look at a lost female friendship. You can see the faint traces of Atonement and Zoë Heller’s Notes on a Scandal here – the unreliability of the story, the two women who are less friendly than it might appear… and that’s where Lane succeeds best: when she’s writing about these two women and their differing perceptions of a moment. The chapters alternate between Emma and Nina, the Emma chapters moving the story forward and the Nina chapters going back and replaying the scene from her perspective (with perhaps a slight additional forward movement), and although the repetition sometimes gets a little annoying, I found it mainly enjoyable. To see a domestic moment play out and then to see it again, from an external perspective – and from someone who has such a grudge against the family – makes you question your relationships and the people you let into your home.

It also makes you question your own past and those you may’ve forgotten – specifically, is it possible to forget someone so completely that you don’t know them again when you meet them? I suppose the answer is sure: how many people, as a kid or a teenager, do you meet and then inevitably forget again. There’s some time in the novel devoted to both Emma and Nina thinking about their children and the way they form memories – will Christopher (Emma’s oldest) remember anything but the faintest bits of this experience or that one? Does Sophie (Nina’s daughter) remember being younger and needing her mother as opposed to pushing her away as a teen? – and I’d like to think that these moments are meant to nudge the reader towards Emma’s side in the ongoing, quietly brewing conflict that is to come.

For a conflict is going to come: Nina is pretty crazy. There’s no other way to put it, really. The things she does to the family (quietly, surreptitiously, unsuspectingly) are just faintly creepy but they grow in menace. What starts out as minor annoyances, even just real psychological stuff like intimidating Emma with her worldly classy ways, does not stay that way – and around when Nina briefly kidnaps Christopher (I don’t think it’s a spoiler to say that, nor do I think you can’t predict it coming – plus, by the Vulture statue of spoiler limitations, the book has been out long enough), you begin to think “oooooohkay” and start to wonder where this is all going.
And that’s the biggest problem with the book.  The slow-burn domestic thriller thing (I saw somebody call it a “chiller” which actually might make much more sense, genre-wise) works if there is some kind of payoff – even if that payoff is that an unsuspecting family gets targeted by a indiscriminate nutjob. But Lane, from the very first page, is setting us up to understand that there is history here. Something happened and we will come to understand what by the last pages. And the big reveal, the payoff as it were, is so slight that if you’re reading too fast (as I was, up late with insomnia and reading away) you might miss it.

For it is, at the end of the day, a perceived slight – not an actual one, not one that was meant with malice or even purpose. One that, I guess, makes some sense in the scope of a person’s life… but Lane hasn’t developed Nina’s backstory well enough (despite some scenes with her now-separated parents) for you to feel anything about the reveal from her perspective. And the fact that, over twenty years later, we’re meant to believe she would set out on this course of steadily-building revenge? The only understanding you can apply is that Nina is, in fact, a borderline psychopath… but her interactions with other characters discount that interpretation. You can’t (as far as I’m aware, anyway – correct me if this is wrong) be a psychopath to just one person: you’re a psychopath to everybody, it’s a brain-chemistry thing.  You can hide it, but at the end of the day, your brain works in one particular way. And since the reader gets to see into Nina’s brain, we can see that it doesn’t. It makes the ending, especially the very ending, a nearly incomprehensible head-scratcher of escalation that Lane is more than happy to leave the book hanging on. It ends with no resolution, only a glimmer of understanding and a whole lot of uncertain potential.

Rating: 3 out of 5. The quiet repetition of domestic life, including Nina and Emma’s regular reflections on motherhood, is the best part of this novel – and the way Lane subtly begins to subvert it. This is one of the first times in my life I’ve briefly questioned my desire to eventually have children; I don’t know that I’ve ever seen the weariness so well-defined (to the point of leaving other things a little underdeveloped). But as Nina’s malice begins to grow, we expect a payoff – and the one that is delivered is laughable at best. Not in a “that’s ridiculous” way but in a “…I’m sorry, what? Seriously?” kind of way. The final 25 pages sap the book of all the chilly tension that had come before – which is a disappointment, plain and simple.