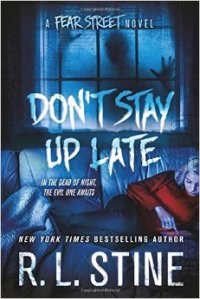 The Short Version: After a car accident kills her father and puts her and her mother in the hospital, Lisa Brooks has been having a hard time with reality. She has trouble sleeping, she’s hallucinating, and also dealing with grief. When a babysitting gig comes along for a sweet kid, everybody thinks it’s a good way to help her get sorted out – but when teenagers start dying, she wonders if her hallucinations might be real after all…

The Review: There continues to be something a little strange about the idea of reviewing an R. L. Stine book at age 26. The man had such an impact on my childhood, influencing me as a writer/reader/human more than maybe any other single author, that it’s hard to be objective now. Of course, the flip-side is that I might be too critical now: I did not love Party Games, the first of the relaunched Fear Street titles.

But while the same criticisms of the writing apply to Don’t Stay Up Late, they were less noticeable here. Perhaps that’s because the plot is stronger and scarier, perhaps it’s just because I was in a more forgiving mood – perhaps it just took a book for Stine to shake off the cobwebs. The things that he does well are still on display, his empathy for these teenagers (even as he sets about gleefully dispatching them) and his flair for the spooky. Lisa goes through an incredibly traumatic event and that is scary enough in its own right: Stine doesn’t pull his punches when it comes to the car accident. You can see it coming and you’re looking through your fingers because you don’t want to miss it but also you don’t want to see it – it’s that sort of scene.

And then things get weird.

I mentioned when I read Party Games that I’d never read Fear Street, only Goosebumps – but this book felt like the proper connection between the two. Goosebumps tended to go meta, especially as the series continued, and Stine is still intrigued by such tricks in this book: Lisa’s boyfriend is a big fan of obscure horror films, to the point that he decides he wants to make one with their friends (as teenagers do – I think we’ve all been at least peripherally involved in a teenage horror film, probably on VHS), and the issue of blurred reality is heightened by the constant back-of-your-mind question about whether or not this might all just be ‘for art’ and the other teens are using Lisa for their personal benefit.

This, of course, is an extension of the primary question of the novel: is Lisa crazy or not? And Stine keeps us in suspense far longer than I expected he would. Even as I was pretty sure I knew what was going on, I wasn’t 100% positive – and I read on with that uncertainty driving me. Lisa, just after the car accident, has a series of traumatic hallucinations and the murderous creature is pretty easily written off as one of them. In fact, it might’ve been an equally interesting narrative choice for Stine to devote this book entirely to the scary things that can come out of a person’s brain – to say that, in the end, the creature was imagined and all of this was in Lisa’s head. That would’ve been a darker and probably more grown-up book – and Stine’s choice to make the monster real is probably the better one, if just to root the fear in something concrete. It’s hard to keep up the “it’s all imagined” game once dead teenagers start appearing on the scene – although I was still thinking that maybe it was all part of a joke for the movie… or hoping, anyway.

And so I was invested, far more than I expected. The resolution comes quickly and I enjoyed how Stine used technology to help the story resolve (there’s a quote from a few interviews surrounding this Fear Street reboot that technology – our constant connection to phones and the internet and other people – undercuts some of the basic scary plots he used to use and how he laments that) – it felt like he was embracing it while also pointing out, by its appearance at the end of the story, that you can still get good scares in regardless of what century we’re in. Monsters don’t care if its 1995 or 2015, you know?

Rating: 4 out of 5. Obviously this is still the sort of thing you should only read if you’re a fan or interested in a quick little spook (or if you are in your early teens) – but Stine’s still got the magic. The first Fear Street Reboot was a little rocky, but this one is absolutely the Stine I remember of old: empathetic and yet entirely ruthless. The chapters are still short and punchy, the writing relatively simple and unadorned, but the scares… hell, they made me jump. So from this former teenager: I’m glad you’re back, Mr. Stine. I can’t wait for you to scare me again.