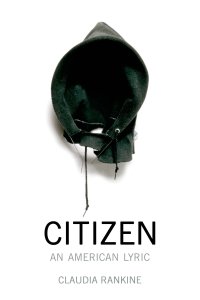 The Short Version: Blending prose and poetry, image and text, Claudia Rankine delves into the everyday experience of racism – microaggressions suffered by heroes and ordinary people both – and paints a chilling picture of America (and the world) today.

The Review: I’ve taken to marking with post-its the poetry that I read. It’s easier to flip back through and find the pieces you really loved, you know? Citizen, for several reasons, was marked with those long skinny post-it tabs and looking at the book here on my desk, it seems to be birthing a forest of fluorescent yellow. Everything in this book feels potent, feels vital, feels visceral – and I’m a young white upper-middle-class male. And I’m horrified.

The opening section of the book is devoted to second-person-writ recountings of microaggressions: these are those little moments that might not seem all that bad, might not seem like anything at all, until you zoom out and realize that they happen every day, to so many people. Saeed Jones’ great BuzzFeed piece, “Self Portrait of the Artist as Ungrateful Black Writer”, could fit right in without breaking the flow – in fact, I had the chance to talk to him about both that piece and this collection for So Many Damn Books this week (listen here).
There’s this moment, this one in particular, that sums up the section: “You think that maybe this is an experiment and you are being tested or retroactively insulted or you have done something that communicates this is an okay conversation to be having.” This theme of feeling like it could not possibly be the de-facto sense of alrightness for these people to say or do these things, to frankly be surprised each time one of these moments occur… It gets under your skin. Perhaps it’s Rankine’s choice to use the second-person address – perhaps it’s just that anybody with a soul ought to shudder at the thought that anyone could be talked to like this. It’s not just about race or gender or politics – it’s about the fact that you ought to think for a goddamn second about who you’re talking to when you speak, that you ought to be a considerate human being.

Of course, we know that human beings aren’t considerate. They’re selfish, self-interested, and utterly terrified of anything that looks remotely like an “other”. Check out the shitstorm Cameron Crowe has stirred up by idiotically casting Emma Stone as a half-Asian character in his new film – it’s not an accident, it’s not that she was the best one for the job (and she’s a very talented actress), but it shows a deeply rooted fear of the other in our society. The other being anybody who isn’t white or subservient.
It’s 2015, though. Shouldn’t this be passing into history now? We’ve seen more and more protests as more and more black men are killed – and yet there is a sense here that nothing will change. Even though we’re having the conversation, the conversation hasn’t penetrated the heartland, hasn’t penetrated the parts of America that believe wholeheartedly in our exceptionalism and that our destiny remains manifest. And Rankine drops a tremendous stanza that explains it all and that also made me get up and take a walk because it just shook me like being struck by lightning:

Just think about that. If you want, you can even geek out (as I did once I came back to the book) about the double-meaning of police and you can say “yes, I see the uses of poetry now, I do!” But what horrible words – horribly true words. We bemoan the lack of imagination in our society today (umpteen sequels, increasingly boring music, etc) but imagination isn’t always brought forth in creativity. It’s brought forth every day in how we see the world – and a whole lot of people but quite often white men (who, yep, still have a firm grip on the neck of the world) see that world in terms of color and of fear that the ‘other’ will come after them. Sometimes its well-masked – I have friends and family members who call football players thugs, who use words like ‘uppity’ without batting an eye, who attack the politics of the President to hide their disdain (fear?) for the fact that a black man got the job. None of these people would consider themselves racist. Hell, most of them feel exactly the opposite. But, as Rankine’s book points out, racism isn’t always overt.

Her long essay on Serena Williams, for example. On the microaggressions played out on a national stage, so obvious to everyone to the point that John McEnroe was like “if that was me, I’d be losing my shit.” And yet when Serena does lose her cool, she’s attacked for it. When she celebrates, she’s demeaned. One of the most skilled athletes ever to walk this Earth and she cannot be genuine because the people of this Earth don’t like the color of her skin.
Side note: if you’re even a little bit a tennis fan, you should read this essay. The injustices brought against Serena on the court, when taken together as a whole, are staggering. Guaranteed you won’t look at pro tennis the same way ever again.

As for the book itself and the form, Rankine’s multi-disciplinary focus helps keep this collection moving in a way that made me question its description as “poetry” – which is how I came to it, although the tag at Strand called it “essay”. I don’t think it’s either, although I suppose calling it both doesn’t really work – and you don’t want a collection like this to get shelved in poetry because, well, people like the me of a year ago would stroll right by it. But essay doesn’t describe it either, because it’s so much more than that. There are short scripts here, there are representations of visual media, there are prose poems, poetic essays, and so on. The subtitle, “An American Lyric”, feels perhaps the most apt: it has a lyrical quality but not in the classical sense of the word. It is a modern sense of the word, embodying all the contradictions of this American moment and hoping in its own way that we can regain our place as a beacon of hope and light for the world. That if some of our citizens can produce work like this and if the rest of the citizenry can read it and understand it… then perhaps we could police our imaginations. Perhaps we could move forward.

Then again, maybe that’s hoping for too much.

Rating: 5+ out of 5. You can (and perhaps should) read this book in a sitting. You should take it and devour it and hold on while your body fights against the discomfort. Because it bounces from form to form, it is able to capture the multifaceted problems of the present here in America – the problem of being a citizen in a country that sometimes (most times?) still wishes you weren’t. This book should be required reading in high schools, for the themes at play and for the formal inventiveness of the form. Books like this could simultaneously inspire someone to like poetry and to like their neighbor. Such power should not be wielded lightly, once bottled into a book or film or other art piece, but should be deployed as widely as possible – for only once everyone starts having the conversation can we hope to bridge the gap. And the best place to start? The next generation. Put this next to 1984 and The Crucible and Romeo & Juliet and maybe, just maybe, things can change.