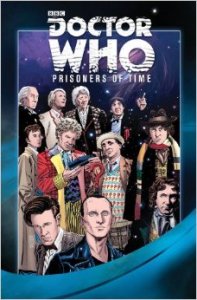 The Short Version: Someone is kidnapping all of the Doctor’s companions – and it’s going to take all eleven of them to get them back. But villains ancient and modern stand in the Doctor’s way…

The Review: Ah the 50th Anniversary of Doctor Who. That was an exciting time, albeit a strange one – the anniversary special had its moments but also ended up being a bit too Moffat-y for most (myself included). And the biggest letdown ended up being that there was no way we could have an Eleven Doctors adventure – the first three Doctors have since passed on and Doctors 4-7 don’t exactly look like they used to anymore.

Enter the Who comic universe, which is apparent rather vibrant and large and something I knew even less about than I did the novels – but, as luck would have it, this AirBnB I stayed in for a friend’s wedding had this book Prisoners of Time lying around and I thought “well why not.” And so I ended up getting a quick adventure that, in many ways, was what we all wanted a few years back for the 50th.

Firstly, a note on style/format. The series was 12 issues (eleven Doctors and a team-up finale) – but the artists involved varied from issue to issue, creating a non-unified visual identity. Sometimes this worked to the stories’ advantage (ex: the Third Doctor was drawn a little darker and more robustly, befitting the darker angle of the story and the Doctor at that time, as well as the slightly cartoony Eighth Doctor adventure) and sometimes it didn’t (ex: the Sixth Doctor’s chiaroscuro shadings and the fact that the Tenth Doctor looked nothing like David Tennant in his issue). But it gave (with the exception of the 11th issue) each Doctor a shot at a standalone story – and that actually provided a great boon.

I’ve never been an old school fan of Doctor Who – I came along at the end of Eccelston’s run, jumping onboard just in time for his regeneration – so my exposure to the older Doctors is limited at best. An ex-girlfriend attempted to get me into the Fourth and Fifth – but there’s a cheesiness to those tales that only works when you’re in the right mood. But now, because of this compendium, I want to check out the Second and Third Doctors and I want to rewatch the movie with the Eighth – I’m reminded of all the various things that the Doctor has been through and that the differences in iterations aren’t just limited to the present: he’s been changing, quite a bit, through the now-50+ years of his existence.

Of course, some things never change – and the decision to include the Master here was quite welcome. Instead of, as Moffat did, creating new mythology (and rewriting a substantial bit of past mythology in the process), the authors here dove back into the Doctor’s past – bringing not the newer incarnations of the the Master but rather the Roger Delgado/Anthony Ainley one into play. He’s the ultimate ridiculous bad guy, but when you think about it, the Doctor is the ultimate ridiculous good guy – they are, as they’ve ever been, the flip sides of the same coin. There’s a nice nod, too, to the lives the Doctor leaves in his wake, which is something the show has tried to continually grapple with: Adam Mitchell, from way back in Eccelston’s first season, is the other villain of the piece. I’m not a crazy super-fan so I had to go back and dig through the internet (and, actually, rewatch those episodes) to jog my memory about who he was… but you do what you must and not knowing doesn’t take away the enjoyable rush of the story.

Rating: 3.5 out of 5. When you’ve got so many cooks in the kitchen, the result was always going to end up spreading a little thin – but it was a delight to see all eleven Doctors get their shot at the spotlight. I wish I’d seen this when the 50th was ongoing, as it would’ve been as good (if not better) a way to celebrate the legacy of the series. Still, it was a fun read even after the retconning and everything else that has since occurred. The merits of the graphic novel angle are up to more frequent graphic novel readers – I just know that I liked some issues better than others but that, in the end, spending time with the Doctor is always going to be fun.