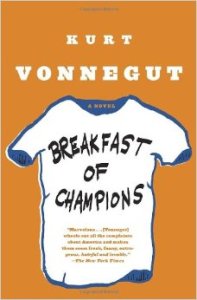 The Short Version: Kilgore Trout, aging and mostly-unknown sci-fi writer is invited to give a keynote address at an arts festival in Midland City. Dwayne Hoover is an increasingly crazy businessman in Midland City. The two are on a sort of collision course across the landscape of the 1970s, narrated by Vonnegut himself.

The Review: It’s odd that I read this book in such close proximity to Claudia Rankine’s Citizen: An American Lyric. The books, of course, are quite different – but there’s a string of connective thread in the anger that both authors feel. On the latest episode of So Many Damn Books, I brought this up in the context of Vonnegut’s anger being quietly accepted, almost ignored, while Rankine’s gets her labeled as “angry”. The racial connotations should be obvious.
And so I was thinking about that as I read this. Also about the fact that Vonnegut uses the n-word a whole lot during this book. And how I understood the use in a satirical context (it’d be hard, I think, to paint Vonnegut as an actual racist) but was also deeply unsettled by it because I know there are people who will read this and go YEAH!

Of course, that right there is exactly why Vonnegut is so angry. He wrote this book approaching as he turned 50 and, as the story goes, he said he needed to clear out all the junk in his head – hence the reappearance of several characters, locales, themes, and the many drawings scattered throughout. But, as befits our great writers as they get older, he’s losing his patience with the world. With our culture of consumerism, the drive to always have the new and the best and to get more-more-more. And finally, in this novel (although it is only the fourth I’ve ever read of his), he just lets that anger rip.
But a wildly angry novel is not always the most enjoyable to read. And it’s clear that Vonnegut is aware of that, while he’s writing.  He’s even a little scared of it – scared, perhaps, of becoming a man like Kilgore Trout. On pg. 198, as he begins to appear in the novel itself, he has a brief conversation with himself. “This is a very bad book you’re writing,” he says – and adds “You’re afraid you’ll kill yourself the way your mother did.”

The plot of the novel is also pretty non-existent. The jacket copy describes the action of the last 50 or so pages – the part where Hoover takes Trout’s fiction as truth – but the pages before that are just this slow build that actually serves as a chance to survey the state of America. As Hoover’s “chemicals” slowly unbalance – he’s a depressive, but also perhaps actually unstable – we see the perversion that is a man crammed into a position that isn’t meant for him. That is to say, Hoover contorts himself to be the Dwayne Hoover society expects him to be instead of society allowing Hoover to be whoever he actually is. You get the sense that he is not happy with his life, even though he owns all of this stores and outlets and things – and he can’t quite figure out why he’s so unhappy.
This theme, by the way, could apply to all of the characters in the novel.  Harry LeSabre, the secret transvestite, is a more obvious example – but just about everyone we meet in this book is stuck being something other than what they actually want to be, because they feel as though they must conform.

Of course, a lack of conformity doesn’t quite seem to be what Vonnegut is advocating either. Look at what happens to both Hoover and Trout when they receive the “message” that they are, in fact, free – the message from their ostensible creators, bearing with it all the loaded truth of the matter. Hoover’s, of course, we know to be false – ‘proceeding from the heat-oppressed brain,’ as Macbeth would say – but what to think of Trout’s? What to think of Vonnegut stepping in to set his own creation free? Should we think nothing more of it than that? After all, Vonnegut says that that’s the point of writing this book.  But creations take on a life of their own, which also seems to go to Vonnegut’s point here – and Breakfast of Champions is no exception.

So how to reconcile this?

We can’t, really. I think we must address the disparity, the gap between the two things, and acknowledge that it is in that gap that Vonnegut’s greatness lies: he forces us to consider things as they are. Think about the small successes in this novel, the moments of observation (all of them spilling forth from that unique narration of a Vonnegut novel) like this one, upon producing a gun in the narrative:

“This was a tool whose only purpose was to make holes in human beings.”

I don’t care for the arguments I’m sure are bound to ensue about gun rights and hunting and whatever – you can’t actually tell me that the gun is, in fact, anything other than a tool to make massive holes in (if you must widen the scope) living things. And I realize that I’d never thought about it like that until I read that line. And I want to shove that line in front of every high school student, in the hopes that it’ll click for them like it did for me just now. Ditto the members of the NRA, the politicians who’d send us to war, those who would cause us (and by us, I do mean humanity at large) pain and strife wherever they might be. I don’t expect them to put down their weapons, but I can’t see how you read that sentence and not have your thinking irrevocably shifted. To acknowledge, at the end of the day, that that’s all the gun was created for.

Even in his anger, Vonnegut cannot help but try to make us see the world for what it is. Or perhaps it is, in fact, because of his anger that he does that.

Rating: 4 out of 5. This one is a tough book to read, I have to be honest. The seams show in uncomfortable ways and Vonnegut is grappling with his own mind in a way that feels… unseemly. It feels as though we shouldn’t see it, you know? Like it’s something that society would rather have swept under the rug or off to the side – “oh no, we don’t want to see that.” Except, of course, the point is that we should see that. Even if it’s uncomfortable to look at or to read – because behind that discomfort is reality. It’s the reality of a world that was fucked up 40 years ago and remains that way today. Just looks different now. But guns still make holes in people and racism lives on, so maybe we should feel uncomfortable.