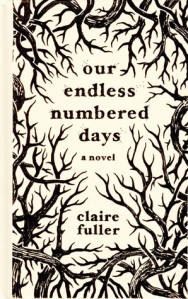 The Short Version: Peggy is eight years old when her father spirits her away to a remote cabin in the European countryside, telling her the rest of the world has vanished. She spends nine years there – but when the novel begins, she’s just returned to civilization. How and why did she come back? And what happened in those nine years?

The Review: We think, today, that the world is going to hell in a handbasket. I mean, we do: global warming, ISIS, the Republican candidates for the Presidency, and so on. But let’s remember that not too long ago, everybody was convinced that the end was coming in one very particular way: nuclear annihilation. And while we haven’t exactly ruled that one out, it’s no longer at the top of the list for the modern era.

Still, the fear was real – and that fear is what sets this novel in motion. Peggy is a moderately well-to-do young English child, born to the somewhat-scandalous union of a world-renowned German classical pianist and her much-younger English page-turner. Her mother doesn’t quite know what to do with her and her father is a survivalist. It’s the late 70s and everything’s a little uncertain. And then it’s 1985 and Peggy is back home.

We’re told she’s come back but we do not yet know the middle space of these two fixed points in time – and this, presumably, is what we’re to find out over the course of the novel. But the twist in the tale is that we’re getting all of this – start to finish – from Peggy’s point of view. And for several reasons, Peggy might not be the most reliable of narrators.  The question then becomes: is she convincing? And is the telling unique enough in its take on an otherwise relatively predictable story?

I’m torn about the answers to those questions. Not too much surprised me about the plotting of the novel – certain “twists” are not exactly given away from the start but there are noticeable holes in the telling that stand out and beg the reader to recognize that they’re not getting the truest version of the story. And of course you’re not: she’s an eight year old, full of imagination and seemingly prone to making up stories. But if Peggy is going to be an unreliable narrator, then we have to question everything about her and this is where the thread begins to fray.

I simply don’t understand how Peggy’s father was able to pull the wool over her eyes for so long. If you’re reading this, you know that the world did not end in the late ’70s, and if you’re reading the first pages of the book, you know that Peggy survives and makes it back to civilization – but nothing that he does or says throughout the novel convinces me that an inquisitive child wouldn’t have explored over the course of nine years. There are a few confrontational moments, where she attempts to look with a spyglass or go to a certain spot and he won’t let her, but these don’t feel like enough to me. Peggy’s lack of inquisitiveness in this one particular area doesn’t jive with the rest of the character as she’s been presented.

The characterization of her father leaves a little to be desired as well. He’s clearly dealing with some mental distress throughout – perhaps bipolar disorder, perhaps something else – and his sudden rages and his deteriorating grasp on reality are all well and good… but Fuller seems to be dancing around other questions of Peggy’s father without engaging with them. Perhaps this is due to the novel being from a young person’s perspective – the mysteries of adulthood and all – but I found myself wondering about some of the things that were only just glancingly touched upon, including the relationship between her father and the young American man who inspires his decision to flee to this strange, distant cottage in the wilderness.  I wanted more context for these decisions, I suppose.

But for whatever reason, the novel seemed to plod through the first two-thirds until it began, like a rock slowly starting to roll downhill, to pick up speed as the end approached. The entirety, both in the past and present-tense action, had been building to the several reveals and dramatic reversals (to use a theater term) – and I have to say that Fuller pulls off that exciting rush rather well. Even without the fullest context of the characters, the basic scenario is gripping and I was riveted. A single sentence near the end of the book, uttered by Peggy’s mother, forces you to radically rethink most of that last third and the events that transpired within, with darkly disturbing result. It’s a strong ending to an otherwise just-fine novel.

Rating: 3.5 out of 5. Fuller’s prose is at its best, actually, when she’s tackling the simplest of things – the ordinary moment-to-moment life out in the wilderness, the child’s understanding of an adult argument. And the ending, despite being pretty predictable, is deployed with skill and the keenness of a thin, sharp blade. But the whole book seems oddly matte and I never quite fell all the way into it. I will say this: I think it might be more of an autumn book than a summer one.

BONUS MATERIAL:
I received this book in two forms, actually – through Powell’s wonderful 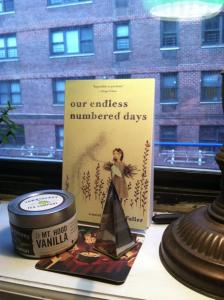 Indiespensable program and through the brand-new Muse Monthly subscription service. As a result, Dani and I both got a chance to read it, simultaneously… while sipping on the delicious Mt. Hood Vanilla black tea from Townshend’s Tea Company that came alongside the Muse Monthly subscription. See, they send you a book and a paired tea every month. As a big tea drinker and big reader, obviously this is my ideal subscription service.
“But how was the tea?!” you clamor and shout.
The tea is… well, for a flavored black tea, it’s quite good. I had it by single-cup and a whole pot and prefer the latter, where it has some time to steep and open up. The single cup suffers from the problem that I think many flavored black teas do in that they aren’t the strongest actual black tea – I wanted more bite to balance the smoothness of the vanilla – but by the last sips from a pot, it had steeped into a nice strength. Most importantly, though, the pairing felt startlingly accurate. I can’t wait to see what the Muses in charge pair up coming next.