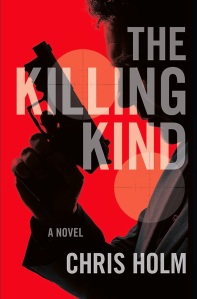 The Short Version: Michael Hendricks is a hitman who only kills other hitmen. He does it to protect the innocent, or nearly-innocent, and hopes to clear his slate after he should’ve died in Afghanistan. But when he ends up the target, he has to use every tool in his arsenal to protect himself and those he still loves.

The Review: Sometimes, you get onboard with an author early on. I was lucky enough to stumble onto Chris Holm just after the first book in his Collector series (I refuse to say trilogy in the hopes that someday there will be more) came out – and he had me hooked. That series was a little crazy and a whole lot of fun, with a damned guy collecting souls while dealing with all sorts of evil (both human and otherworldly). So when he got called up to the big leagues (from Angry Robot to Mulholland), I hoped his charm and wit and verve would go too.

Lucky for us, they did. The Killing Kind isn’t too far afield from that first trilogy – although there’s nothing supernatural happening here. Still, Michael Hendricks and Sam Thornton are kindred spirits, in a way: they both collect bad guys. It’s just that Sam picks up souls while Michael… well, Michael’s the one who divorced the soul from the body. A hitman but one who only kills other hitmen. It is a terrific one-sentence pitch and Holm is a savvy enough writer to know that you don’t have to overthink it – you can just hit it and not try to unnecessarily complicate things.
As such, you’re probably going to be able to predict the vague overall arc of the novel. If that’s a problem for you, then I don’t know how to help you: a surprising reinvention of narrative tropes is not what this book is meant to be. It is, instead, a perfectly executed tale – not unlike, one might say, one of Michael Hendricks’ hits. We’re introduced to Hendricks on the job, quickly given enough backstory to understand where we are and who’s in play, and then we hit the ground running. Each domino falls exactly when it’s supposed to and the thrill of the book is watching one topple onto the next.

But even as he’s writing a taut and clean example of the thriller genre, Holm is making sure you remember his work, too. Here’s an example: the hitman who is coming after Hendricks asks another character “if I might have a word.” Nothing out of the ordinary, but Holm goes on to explain in the drollest terms that the thing that scared this other character is that “it was four in the morning, and the words had roused him from sleep.” That’s as dry as a Vesper martini, my friends, and just as delicious. There are moments like this, whether they’re of laugh-out-loud humor or deeply felt emotional resonance, scattered throughout the book and they elevate this from “just another thriller” to “this Holm guy has something special.”

He also knows how to weave the tale. At first, I felt it odd that many of the characters were (it seemed) overly described. It seemed, for example, like every time Englemann appeared, we got a full description of him.  But it suddenly clicked for me when I realized that Holm isn’t repeating himself: he’s showing us something both about Englemann and about the characters describing him. Hearing about him from one person’s point of view and then from another’s gives us insight into both of those describers as much as it does a picture of Englemann – a subtle trick, to be sure, but a brilliant one. It shows the same care-of-craft and intelligence that made me such a fan from day one and it makes this book better than your average thriller.

Rating: 4.5 out of 5. It’s a quick read – great for a weekend afternoon – and there are some moments where it almost felt like it was rushing by too fast. I wanted to spend even a little more time getting to know Hendricks, getting to really delve into the character stuff and the view of the world on display before me. Still, I’ve been reading long enough to know that it’s always better to be left wanting more. And boy oh boy do I want more – whether it’s Michael Hendricks, Sam Thornton, or somebody else entirely, I want more Chris Holm whenever I can get it. Talk about reliable entertainment. It’s like John Wick: you say “okay, I guess that’ll be interesting” but everything just lines up & you walk away saying “damn, that was FUN!”