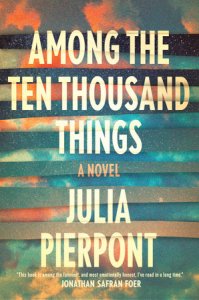 The Short Version: When a box arrives at the Upper West Side apartment of Jack & Deb Shanley and their two children, 11-year-old Kay thinks it might contain a gift for her. As she and then the rest of the family are shocked to discover, it in fact contains the correspondence between her father and his young mistress. Over the course of the next few weeks and next several years, this single moment will push apart an already fracturing family unit.

The Review: Julia Pierpont’s debut novel is another of those that garners so much unstoppable acclaim even before it comes out. I remember seeing galleys that were covered in blurbs and the hardcover has its pick of the litter, including Jonathan Safran Foer and Megan Abbott. And while I enjoyed the first hundred pages very much, I didn’t necessarily see anything extraordinary about them. I was content taking my time with it, not taking it altogether seriously, until a serendipitous tweet by John Warner sent me sneaking out of the office early on a quiet summer’s afternoon to push on, intrigued.

I finished the rest of the book that same night. A dazzling move at just about the halfway point of the novel reminds me of nothing so much as Virginia Woolf’s To the Lighthouse – except, in a way, Pierpont’s telescoping look into the future complicates the storytelling far more than Woolf’s because she then returns to the present instead of picking up in the future. We are given information about the futures of these four characters and then returned to the exact point that we left them, as though mid-breath the reader was suddenly given a gift of omnipotence only to have it taken back again just a moment later. This should spell imminent boredom for the reader – if we suddenly know what’s going to happen, especially so much of what’s going to happen, what is there to retain our interest? – but Pierpont managed to make me care more about her characters than ever before. I was, and still am, in awe of such a magic trick.

The other supremely impressive thing that Pierpont delivers here is making an oft-told tale – the discovery of a cheating spouse – feel fresh. Part of that isn’t anything to do with her so much as it is life imitating art: the hubbub over Gawker’s decision to post then pull an article outing a Condé Nast exec and the hack at Ashley Madison spawned a piece at The Cut entitled “Are Broken Marriage Vows Grounds for Blowing Up Someone’s Life?” – or, as the URL puts it, “Cheaters Deserve to Have Their Lives Ruined”.
And it’s hard to disagree, at least in the terms of the Shanleys’ story. Jack Shanley is – and always has been, it would seem – a bit too scattered to be a Good Husband/Dad. He’s an artist, which ostensibly gives him a freer reign to go his own way (long nights at the studio, mercurial temperaments, etc), but Pierpont thankfully doesn’t let him get away with such clichés. At the same time, she doesn’t give Deb a free pass either. There’s not a single thing about their relationship that makes me understand why Jack strayed but Deb’s behavior points to her not being an exemplary human being either. In the back half of the novel, her attempts at keeping her family somewhat on an even keel where often cringe-inducing, especially her overreaction to Simon and Kay’s new-found freedoms in Rhode Island.

During this mom-freakout, she utters the line: “She doesn’t get to be alone. Eleven-year-olds don’t get alone time.” This struck a remarkable chord with me, because I think it sums up everything that Deb… not does wrong, per se, but it feels like its her desire to over-parent as a response to the inability to protect her children from the horribleness of the box and its “adult” content. There’s something about the freedom that the kids experience in Rhode Island – minimal phone coverage, no video games – being taken away once they do something that they don’t directly realize is wrong… look, young boys meet cute girls in the summertime and they do stuff. And that, perhaps more than anything, is the greatest signpost of losing one’s child to the wider world. Pierpont is able to produce both sides of the moment, from the point of view of the children and the point of view of the adults, and make both sides seem both reasonable and unreasonable. This isn’t an equivocation, though – instead, it’s just reality made manifest.

Rating: 4 out of 5. What begins as a somewhat ordinary, if convincingly drawn, portrait of an explosion within a family unit becomes so much more thanks to a Woolfian twist in the middle of the telling. Suddenly, despite or even perhaps because of the family’s futures being known, we are drawn all the more closely to them over the course of 18 days in the summer. They are still a pretty ordinary group of people – nothing makes any of them any different from the many people who go through similar things throughout their lives – but Pierpont presents them so beautifully that the back half of the novel earns the raves she’s been receiving. Hers is a talent to keep an eye on.