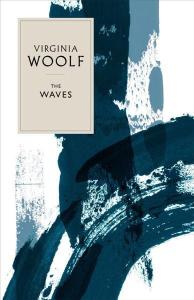 The Short Version: A series of soliloquies or internal monologues, delivered nearly uninterrupted, across the lives of six acquaintances – three men, three women – from their childhood until their old age. The only intervals are a series of short vignettes detailing a coastal scene from early dawn to nightfall.

The Review: I’ll be forthcoming and admit that this book nearly threatened the sanctity of the Ten Year Catch-Up project. Partially because, even though I’d had a very agreeable time with To the Lighthouse and (of course) Mrs. Dalloway, I was decidedly nervous about this book. I don’t always react well to experimental literature and everyone to whom I’d mentioned my plan to read The Waves said something along the lines of “good luck to you.”
And then I started the book and promptly fell ill – so ill that I couldn’t read for about a week. Naturally, this book fell to one side… and then, of course, there was the need to jump back into reading with things I’d find easier to comprehend… and when I picked it back up again, I was worried that too much time had passed and that I’d been bested by Woolf’s strange “playpoem”.

To my great surprise, however, Woolf’s book allowed me back in almost seamlessly. I can’t think of too many other books that would offer a reader such an ease of returning after nearly two weeks of having not so much as looked at the cover. It makes me wonder, to some extent, if I was not “diving deep enough” into Woolf’s admittedly complex and multilayered prose – but it also gives me a tremendous respect for Woolf’s true abilities as a writer: she speaks to every level of reader, simultaneously.

Don’t get me wrong: this is a strange and difficult book. I’ve certainly never read anything like it and I’m not sure I could read something quite like it ever again (although Rules for Werewolves might prove me wrong). There is no descriptive writing in the traditional sense (ed. note – I’m excluding the pastoral interludes but will come back to those in a bit) but instead the novel moves forward entirely in a form of dialogue. Woolf eases the reader in, to some extent: the first pages are single sentences from each of the six main characters’ voice, flowing in a round. She then expands to paragraphs and beyond – and it can be, even to the end of the novel, rather disorientating. What description exists is delivered by characters and through this shift of perspective, we never quite get a concrete understanding of who/where these people are. Instead, we get a symphonic view: each strand blends together into a single understanding of “ah, it looks like this.”

This is a tricky thing to understand and an even harder thing to create, but Woolf does it. The six characters in this novel are not so much individual characters as they are all part of one larger consciousness (Woolf’s own, perhaps) and it’s hard to speak about any of them without talking about the others. They certainly have their own personalities and their relationships are often… well, perhaps not clear but they are understandable in their complexities – but they all exist in relation to each other, not as individuals. In the final section, which is devoted entirely to Bernard (the closest, I’d argue, to being the main character), we see how an entire life may be said to be only explicable in the context of those other lives that intersected with it.
Which is an imposing thought.
Much of the joy of Woolf’s novel comes from these larger thoughts about relationships and about life itself. What is life, exactly? Who are “we” except in our presentations towards others? Even moments like Bernard walking into the pillar-box, where he was alone in the sense that he knew no one around, are moments that are reflected outward. And private moments, well, no one is truly private because you always think about the people you’ll interact with or those you know. Even your individual reactions and selfish moments are somehow informed by the people you know and the life you’ve lived.

And in the midst of all of this very high intellectual contemplation, Woolf interjects these scenes of absolutely transcendent prose depicting a beach throughout the course of the day. As the characters’ lives go on, so too does the day – ever moving towards darkness, of course – and Woolf uses these moments to leapfrog the characters forward several years… but they’re also a lovely respite for the reader. I’ll admit that I, at first, was reading them too quickly – they were lovely, yes, but what did they have to do with anything?

They are eternal, is the thing. The moments of these characters, they are fleeting even in their echoes and reverberations throughout time – but the world, nature… these things are forever. Time, as Bernard reflects in the last section, moves forward inexorably. Monday always heads into Tuesday, even if it isn’t called by that name. The waves will always continue to break upon the shore.
What a thing.

Rating: 3.5 out of 5. I’m still intimidated at the thought of reading this book and I’ve just finished it. Woolf’s writing here is often a bit too much to handle; you really do have to let it wash over you like the rhythm of waves upon a shore. But she delivers some of the most exquisite writing here – whether the depictions of the beach, a well-honed sentence exploding internal emotion outward, or even just a small phrase of realization… there’s almost too much to take in at one go. It becomes often overwhelming, but also sort of hypnotically attractive. The reading doesn’t necessarily get easier, but you find yourself pulled along more smoothly as it goes on. It is a unique piece of writing, that much is absolutely true.