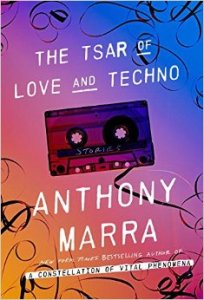 The Short Version: In 1937, a Soviet censor engages in a small act of rebellion by painting his brother into all the works he’s also censoring. One particular painting, an otherwise ordinary pastoral landscape, goes on to touch the lives of several individuals during the tail end of the 20th / early days of the 21st century.

The Review: I was caught off guard by how much I loved Anthony Marra’s debut novel, A Constellation of Vital Phenomena. A novel about Chechens struggling to carve out a life during and between wars didn’t immediately seem up my alley, but I loved Marra’s writing and the emotion that he brought to bear on the story. His writing, as I said then, reminded me of Ann Patchett’s and I was very excited about the prospect of a follow-up novel.

And be assured, reader: this is a novel. Although it’s got “Stories” on the front and although each section (well, nearly each one) could – and perhaps has or will – stand alone as a short story, it’s more than a collection of linked stories like This is How You Lose Her and instead much more of a “novel-in-stories” like A Visit from the Goon Squad or Kitchens of the Great Midwest. Marra has a small cast and each of them get a chance to shine in their own story, a story that often shines some light on some angle that had previously only been alluded to or had been brushed aside. It’s this tightness of focus that keeps the central narrative clear, even though it is a tiny narrative.

Actually, there might not be a true central narrative, other than the lives of these characters. The painting, yes, ties them all together – but the painting is more of a Macguffin than anything else. The censor’s act of rebellion is only important in how it connects him to the other characters, not in the politics of the act. The painting changes hands, moves through time, sometimes doesn’t even directly affect the story – but it looms in the background, sometimes quite literally. More important are the way these characters connect and the way Marra crafts them all so wonderfully. Galina, the former Miss Siberia movie star, and Nadya, the blinded art restorer, and Koyla and Sergei and the rest of them – they feel vivid and real and like people you want to spend time with, in the literary sense. It’s a delight.

The stories are nearly all top-notch, as well. And their connections between them end up bolstering each other, creating a whole greater than the sum of its parts. Even “Palace of the People”, which was perhaps the weakest story in the collection for me, is redeemed when, in the succeeding story (“A Temporary Exhibition”), the connections to the censor become clear and the map of the story – the web of coincidence, as it were – snaps into focus for the reader. Some of the stories could, as mentioned, certainly exist on their own – “The Grozny Tourist Bureau” has a delightfully absurd streak, all the more absurd for just how realistic it is, and “Granddaughters” is a great experiment with first-person-plural. But I don’t think they’d have the same impact read individually as they do when you can place them in conjunction with each other. A tossed-off comment here ends up being revealed as a cataclysmic moment in someone else’s life several stories later and, as a reader, you marvel at Marra’s weaving.

There’s also a bit more lightness to this collection. It begins with the cover, a playful color wash and an unspooling cassette tape – a cover that makes me smile, makes me want to just pick up the book each time I see it. But it’s also in even the most serious of stories.  Marra knows that his focus is tighter here than it was in Constellation and it allows him to be a little looser, a little more relaxed. If this ultimately means that the collection doesn’t land as immensely as Constellation, I think it’s an okay trade: that first novel was meant to wallop you (in a good way) whereas this one is just meant to entertain (also in a good way).

Rating: 4.5 out of 5. The back half – Side B – is a little weaker than the first half and two of the last three stories didn’t quite stick the landing. Still, there is a dreamy and lovely quality to the way it all comes together and the way these people’s lives have been interconnected even without their knowing it. Marra brings humor, warmth, and all of the heart that he brought to his debut while also allowing himself to be a little more relaxed and have a little more fun – and it cements him as one of our brightest young stars. This is a feel-good read that also makes you think and an excellent follow-up to a stellar debut.