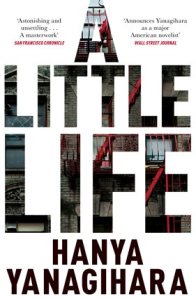 The Short Version: Jude St. Francis arrives at college with crippled legs and an unplumbable past. He falls in with three other guys, fast becoming a nearly inseparable foursome. And as life goes on for the quartet, Jude must finally come to terms with his past while also overcoming illness, pain, and heartbreak in the present.

The Review: I don’t know that giving an author a second chance has ever been so rewarding. You see, I very much disliked Yanagihara’s first novel, The People in the Trees, and I’ll admit that my reluctance to pick up this book was related to that. I know that I often encourage readers to give authors at least a second chance – everybody has a dud in them, I think it’s safe to say – but I was nervous about taking my own advice, even in the face of literally everyone I know who has read this book saying “Drew, you have to read this book.” It became a running joke on SO MANY DAMN BOOKS. People I know who don’t really talk about what they read or who don’t read that many novels were spotted carrying this book around and asking me if I had thoughts.

But I kept hesitating on this (not-so-)little-novel-that-could. Maybe it was because I was nervous about the most-often discussed aspect of the book: that it would absolutely crush me. That I would be devastated. That I would be overwhelmed by the sadness present. I wasn’t about to spend my summer reading something that would depress me and, having just undergone a rough couple months of stress and illness, I wasn’t exactly excited to risk a bout of actual depression brought on by a book.
Except the thing that most people won’t tell you is that this book is also incredibly hopeful. This is a book that, to me, feels like a book about the joy of living – and how sweet that joy can be, even in the face of truly horrific experiences. This is what surprised me most and subverted the nearly impossible expectations that’d been set up by everyone outside of the New York Times.

Let’s get one thing straight, though: there are horrific (the only possible word, so I have to use it again) depictions of sexual and physical abuse in this novel. Jude is one of the most unfortunate characters literature has ever seen and his life, from being discovered as a baby in a trash heap to his eventual death, has just an astounding amount of sadness present. And Yanagihara, who explored child abuse of the sexual variety in her first novel too, takes a caring albeit journalistic approach here: we’re not getting play-by-play descriptions but she also builds these moments up in a somewhat uncomfortable manner. When we’re initially introduced to Jude, we see him as a mid-20s post-grad arriving in New York. His cadre of friends (Malcolm, Willem, JB) don’t know much about his past but assume that he had a shitty childhood – but the narrative takes pains to let us know that, oh no, Jude has had some truly fucked up stuff go down in his short life… but it doesn’t tell us about it. This is the part of the novel that bugged me in the beginning, this teasing slow-drip reveal of Jude’s past. My problem with the constant teasing and hinting is that it takes Jude’s past from being a suspenseful and devastating revelation to something altogether more lurid. There is almost a masochistic glee, a sense of “oh just you wait!” that develops. Considering that the reader is able to sketch out a pretty good sense of everything (except Jude’s time in Philadelphia) long before it’s actually explained to us in the novel, I can’t help but wonder why Yanagihara structured things like this. It doesn’t tip into the realm of the reader being annoyed, but it does push the novel into melodrama more often than it necessarily needed.

And while I found myself occasionally wondering if it was necessary to draw out Jude’s pain to such lengths, I also appreciated Yanagihara’s unwavering commitment to the complexities of an abused soul. All too often, these characters get a true happy ending in our fiction and our films – they’re troubled, they struggle, but they come out of it “healed”. Having a character like Jude in the popular consciousness can only help people better understand that abuse – especially as a child and especially sustained abuse – can have truly lasting impacts and that the victim’s mind might no longer be able to comprehend a better world. And as we see Jude try, first with his quartet and later with Andy, Richard, Harold, Julia, and even Caleb, we are given one of the most astounding psychological portraits ever to be put to paper. The frustration that I felt, as a reader, when Jude couldn’t see the good thing in front of him… it was the same thing his friends felt as they tried and oddly failed to help him. When Jude’s relationship with Caleb starts, you see just how easy it is to not only be frustrated but to be cruel about it. (This, incidentally, was perhaps the most harrowing part of the book for me – not the childhood stuff, not even the Philadelphia scenes, but this.) Jude’s suffering may feel extreme when you line up everything that’s happened to him, but just because his case is an extreme one doesn’t mean that the individual moments aren’t things that happen, altogether too often, to the people around us.

But I didn’t so much have a problem with the focus on the bad things happening to Jude as I did on Yanagihara’s drifting focus in the early half of the novel. It seemed to me, at times, that she wanted to write an even bigger book – a true Dickensian symphony – that followed each of the four friends through their lives. We spend time, in the early going, with each of the four boys (Jude, Willem, Malcolm, JB) and we get into their heads and their lives… only to find those plotlines not abandoned but certainly let fall in favor of following and exploring Jude’s story. This is all well and good, as I think a substantially bigger novel that showed us all four characters’ perspectives on everything would’ve been all the worse for it – but I was frustrated by, for example, spending time in close-third-person with JB as he fights drug addiction only to basically have JB cut out of the story a short time later. We get to see Malcolm at home with his parents and that uncomfortable dynamic… and then Malcolm recedes so far into the background that he’s the only one I couldn’t really tell you much about (other than that he’s an architect). It’s clear that Yanagihara’s interest lies in Jude and, secondarily, Willem – but even Willem’s story is meant to (authorially) serve Jude’s. The vignettes and tangents with each character are wonderful, don’t get me wrong, as they do build a rich portrait of the world… but they also often seem like abandoned threads more often than not. I don’t know that much would’ve been lost to hear about JB and Malcolm (in particular, but also including Andy and Harold and even Willem in this) from a more omniscient third-person, with the focus really truly being on Jude. That’s where the book is at its strongest and where Yanagihara’s interest clearly lies – and this is not, despite what the early going and the jacket copy promise, a tale of four friends over the course of their lives. While many lives are lived out over the course of this book, one little life is clearly more central than the others.

While the polyphony often works (something that’s not a given even for veteran novelists), Yanagihara’s true success comes is in the moments of uplift. The characters of Harold, Willem, and Andy in particular (although all of Jude’s friends fit this bill, as to a large extent do his coworkers and acquaintances) are relentless in their desire to make a better life for Jude. Sometimes, they get frustrated and yell and fight – as anybody would. But moments like the adoption, the profession of love, a late-novel tossed-off aside from Andy’s wife… These are the moments that brought tears to my eyes, not because they were sad but because I was so happy for Jude. He spends so much of his life wondering if he is actually loved by anyone that it’s hard not to want to weep at the moments where the answer is an overwhelmingly clear ‘yes’. And for anybody who has ever felt like they weren’t sure if they belonged amongst their group of friends – not even for a serious reason like the fear that those you trust will betray you, but perhaps just a more mundane insecurity – these moments are for you too. Look up from the book and think about the people in your life who are there for you. I guarantee that you will and although they might not look like the cast of this novel, they sure are there in the same way this cast was there for Jude.

Rating: 5 out of 5. It’s a towering achievement, without a doubt. There are some sections that are often overwritten and, for my money, the book could’ve done with a substantially stronger edit – but on the whole, Yanagihara’s successes far outweigh her flaws in this compelling second novel. Yes, it is an emotionally draining ride and the scenes of abuse (physical, sexual, emotional) are legion – but the real trick of the novel is not those moments but the happier ones. The scenes of ordinary life: dinner amongst four friends, the joy of moving into your first apartment in New York, parties and openings and why Thanksgiving is so important, the slow (or not-so-slow) takeoff of a career, and so on. I may remember Dr. Traylor and Brother Luke and what they did to Jude – but I will never forget Harold, Willem, Malcolm, JB, Andy, Julia, Richard, and the way they made Jude’s life better. The best we can hope for in this world is a team of friends and family (whether by blood or by bond) who’ll love us the way they loved Jude and that’s the greatest success of this novel.