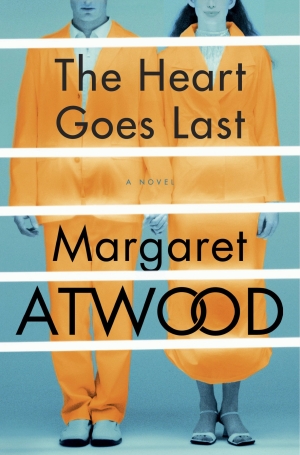 The Short Version: Nick and Charmaine are a down-on-their-luck couple, living in their car in an America of the near future. When they’re offered the opportunity to join Consilience/Positron, a new planned community where you alternate between civilian and prison inmate every month, they leap at the chance for a new life – but is it all too good to be true?

The Review: When I was in my early teens, my family went to Disney World and, during the trip, we stopped in Celebration, FL. If you’re unfamiliar, it’s a planned community just outside of Disney that was built by Disney – and, even as a kid, I felt something wholly wrong about the place. I was unfamiliar, then, with The Stepford Wives but my first reaction upon reading that story was “Oh, this feels like Celebration.”

Not surprisingly, my overwhelming takeaway from The Heart Goes Last is that Atwood’s Consilience is a Stepford or a Celebration for the modern, dystopic age. The novel itself is only so-so, often fitful and uneven, but particular items and ideas from the book are inspired inventions – none more so than a town where the residents spend half the year in prison and half the year as ordinary citizens, in order to solve housing and employment problems.

Don’t think about it too hard, because the concept will fall apart. Lean in, instead, and recognize that Atwood knows the premise is a little wobbly – and she wants, instead, to go forward with the assumption that it isn’t. That this universe, a near-future that feels as possible as that of Gold Fame Citrus, is one where this sort of universe in which somebody somewhere says “yeah, what a great idea!” and convinces others likewise. Considering, for example, that Donald Trump remains the frontrunner for the Republican nomination, this actually isn’t too implausible.

The general premise of the book is that a fitfully married couple who’ve lost nearly everything get a second chance when they apply to move into this apparently idyllic town, getting jobs and becoming part of a model community. Sex messes things up, of course, and at first it seems like Atwood has written an oddball romcom – there are some breathy moments, some considerations of sex vs. love, mention of “prostibots” or sex robots, and the whole things pretty much feels like it’s a slammed door away from turning into a French farce.
And then it takes a dark turn, heading into more political territory with strains of The Manchurian Candidate and the great 70s spy thrillers. And while this makes the back third of the book roll past with speed, I couldn’t help but feel like the novel never managed to coalesce. Instead, it was disparate and interesting parts that were ungainly pasted together to create a whole. I’ve not read any of the Wattpad-writ early pieces of this novel but I wonder if the attempt to weld them into a larger single book is what caused the tonal disparity and the sense of some sections being oh-so-clearly filler before the next big moment.

Sadly, this herky-jerky pace also applies to the characters: they never feel like too much more than sketches, here to serve the whims of whatever’s needed at that particular moment in the plot. Even some of the more emotional moments feel oddly medicated, as though we’re reading them at a remove. As such, the satire (because that feels firmly like what this book is) has trouble landing. There were glimmers of connection, but when a book’s ending reveal seems to promise a much thornier conversation about the reality of love that’s about to happen offstage than anything we’ve read so far… you end up feeling a little disappointed.

Rating: 3.5 out of 5. Full marks for ideas, certainly: Atwood is as puckishly inventive as ever and that slight hint of mischief you see in nearly every photo ever taken of the woman is definitely infused into the work. But I honestly wish it’d gone further, that she’d written the sex farce that the first half of the novel hints at becoming. Instead, her aim is wide and the satire feels diluted, dispersed over too much surface area: prisons, masculinity, the nature of love, the economy as it pertains to sex workers AND to factory workers AND to ordinary workers, political thrillers, and more. I’d be curious to go read the smaller parts of the Positron serial novel and see how it morphed into this – and to see if it was the original idea or the transition that didn’t come together.