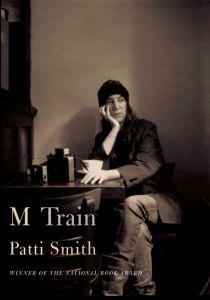 The Short Version: Over the course of a year and a half or so, Patti Smith reflects on the roads she has traveled to come to this point as well and also recounts some of the roads she continues to travel down.

The Review: Just Kids is, I think you’ll have to agree, one of the best memoirs ever written. Patti Smith gave us a glimpse into a world that transfixes us even still – the 60s & 70s in New York, a time when artists could really flourish here – but also she painted a portrait of a relationship, intimately. So intimately that, when you finished the book, you realized that there were still whole chapters of her life untouched – and the promise of a follow-up, of more of that poetic prose, had everybody salivating.

Interestingly, M Train is not the sequel to Just Kids. I struggle, in fact, to even classify it as a memoir (although that’s certainly what it has been billed as). Instead, it takes on an ethereal quality – part essay collection, part memoir, part dreamscape, part photography collection – that can’t be pinned down as just one thing. It does give glimpses into other parts of her life, specifically her marriage to Fred “Sonic” Smith, but it isn’t a straight narrative. Instead – and I think to much greater effect – it is a travelogue of sorts, channeling not only the linear progression of time but also the way time is recursive, the way it can loop back on itself in memory and dream.

Tellingly, she recounts a series of dream encounters that she has with a laconic cowboy – fictionalized or not, you can bet that it’s meant to be Sam Shepard waxing philosophical – and everything about these stories have the slight air of… well, not of dream but of memory. It’s interesting that she recounts, in several chapters squarely in the middle of the book, her time diving into the work of Haruki Murakami. Having done this recently myself, I was intrigued to see the way that his dream-logic influenced Smith’s – although whether intentionally or subconsciously, it’s hard to say. But there is a definite similarity to be noticed in the way that Smith moves through storytelling; a placidity that deceives you into thinking you can see the whole way down.

I’m also deeply intrigued by the news, related during her New Yorker Festival chat with David Remnick, that she’s not only intending to write more – but that she’s interested in writing a mystery novel. She certainly does love her mystery TV shows, giving more love to The Killing in this book than it has received maybe anywhere ever before, and the prospect of an icy noir from Patti Smith is definitely exciting… but the mystery of life, not to get too hippie-dippie about it, is what’s at stake here in this book and Smith is a detective, trying to plot a course through signs that she can only maybe comprehend. There are elements of this Patti Smith in Sara Gran’s Claire deWitt and I appreciated the ways in which Smith is reflecting on her life as she heads into winter.

Take, for example, the time she spends at Cafe ‘Ino – and the suddenness with which the cafe closes (in late 2013). Ditto the sudden ferocity of Hurricane Sandy, demolishing the boardwalk where a friend has just opened a coffee shop and where she’d just bought a small bungalow. And, of course, the glancing looks back at her life with Fred – whose appearance in this book is more substantial than in Just Kids, but who remains an enigma, a cipher, an intensely personal part of Smith’s life that maybe she just isn’t ready or willing to talk about so completely. But all of these things share the same reflective, contemplative attitude: why did these things happen? How do we move past them? What does it mean when the world changes around you and you feel the same as you did before? Does the disappearance of a jacket have a larger meaning or did you just lose the damn thing?
Considered by a lesser mind, this would be sophomoric – but in Smith’s hands, these questions are as transcendent as they must’ve been to the philosophers of old. She returns the philosophical to the immediate moment, allows you the comfort of knowing that you’re not the only one who sits alone at home and wonders how different the outside world might be from the last time you ventured out, even if it was only a few minutes earlier.

It’s hard not to think about this book in terms of the passage of a year, especially with 2015 coming to a close in just a few short weeks. In some ways, it is no different from any other year (this one or the 2012-2013 year-and-change Smith depicts here) but also these moments meant something. They are, as The Doctor might say, fixed points in time because the ripples spreading out from them are larger and wider than we could’ve ever known. (Also, how fun is it to know that Patti Smith is a Tenth Doctor fan?)  There are moments in this book where you can feel the author starting to address mortality, to see that the clock doesn’t have infinite time left on the dial – and the drive to see everything and to experience everything has been supplemented by a desire to understand at least some things. To remember them, too.

Rating: 5 out of 5. It’s not Just Kids, nor is it meant to be. Freed from the constraints of traditional memoir, Smith has put together a memory play of sorts – complete with that same thin curtain that was meant to separate audience from stage in The Glass Menagerie. She takes us through a year in the life while simultaneously revealing the life within that year – and the way other lives, present and past, continue to affect her present one. There are moments of wonderful silliness (thoughts on Murakami, coffee, detective TV shows) and beautiful solemnity (elegies for her late husband, for other lives lost too soon, for the Rockaways) and, above all, a straight-shooting philosophical bent towards the world as we know it. If the cowboy in her dreams is Sam Shepard, spouting complicated koans of wisdom, then Smith is the wise-cracking clear-eyed seeker who’ll cut through the shit for the rest of us. I can’t wait to see what she puts out next.