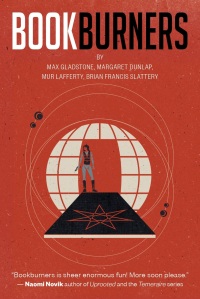 The Short Version: After her brother nearly dies from calling up a demon, NYPD Detective Sal Brooks joins an oddball team based out of the Vatican and charged with hunting down magical relics. But even the Vatican isn’t necessarily safe from evil…

The Review: So let’s talk first about the structure of this here thing. SerialBox Publishing is taking Mark Z. Danielewski’s idea for The Familiar (a reading experience that mirrors the experience of a really great TV series) and doubling down: a writers room of several authors collaborate on the story, then take individual episodes (released weekly), over the course of a 13-16 episode season depending on the ‘show’ in question.
In fact, I’m oddly inclined to call this a show, even though it’s very much a book, just because the structure is so similar to that of how we consume TV. I even binge-read (or, well, listened) to the first twelve episodes over the space of about three weeks in order to get caught up in time for the finale – and while we’ve been doing that with reading forever, catching up on a series by burning through book after book, it feels a little different here. Most interestingly, it’s the “writers room” model that stands out to me, because these stories don’t feel like they were written by different authors – and all of these authors have markedly distinct voices (as, you know, authors should). Sure, there are episodes that feel a little more outside-the-box (the flashback-heavy “Now and Then”, for example) – but the characters all retain a unity of voice and the stories themselves have a unity of tone that really impressed me.

The story itself isn’t anything new, necessarily: skeptical cop gets caught up in magic, oddly isn’t perturbed by it (well, at least as much as you might expect someone to be) and joins the team. This, too, feels very much TV – like we could see this show as a mid-season replacement on FOX or something. Actually, come to think of it, it shares some DNA with The Librarians or Warehouse 13, too. And while I don’t think the model is necessarily sustainable without truly innovative ideas, this was a perfect place to start and to convince readers that a serialized app-novel is worth their while.

The sixteen episode first season of Bookburners has the ups and downs you’d expect from any series (book or TV) – but the team of writers led by Max Gladstone (and including Mur Lafferty, Margaret Dunlap, & Brian Francis Slattery) keep you riveted throughout. I listened to the show, thinking that this might be a fun way to make another attempt at getting into audiobooks, and Xe Sands’ narration is perfectly paced and just showy-enough. She dips into various voices for all the characters without ever trying too hard to pull off, say, a burly Irishman or a New York cop – instead, while there are changes to her voice and inflections, we remain comfortable in the knowledge that it’s one person reading this to us. At least, I find that to be quite a comfortable thing, as opposed to narrators who attempt to contort their voice to give the impression of a full-cast recording (full-cast recordings, of course, being the ideal).

I found myself hooked by about episode 4, to continue speaking broadly about the reading experience. The first few episodes are good but they’re very much about finding the story’s and characters’ feet – its only once we have a bit of a sense of who’s who that the writers get a little more comfortable and have a little more fun. The plot starts slowly as well, with the show focusing more on monster-of-the-week episodes before layering in more and more of the overarching Big Bad storyline. Harrowing episodes like “Big Sky” and “Codex Umbra” only work once you’ve invested in the team and I’m glad the authors took the time to give readers that investment. We care about Sal, even if this thing with her brother feels a little tenuous at times. We root for her and Liam, bemoan their breakup (very realistically rendered), grow increasingly curious about Grace’s deal, wonder about Ménchu’s past… and we’re given tidbits of all of these things as the season progresses. By the end of season one, the players are all in place and we’ve come to know them well enough that the gap of “no new episode this week?” actually stings a little.

Rating: 4 out of 5. Sometimes it does get admittedly a little too predictable and there are some holes in the storytelling here and there that I wonder about – but for a first go at a bold experiment with how we consume stories (and how they’re written, for that matter), I was thoroughly impressed. Even as someone who finds audiobooks distasteful, I found this to be a pleasant experience – although I may try reading The Witch Who Came in From the Cold instead of listening to it. Regardless of what else SerialBox pulls off down the line, however, I’m hooked on Bookburners and can’t wait for season two. It might not be the most incredibly astounding series you’ve found (on your shelves or on Netflix) but it’s a damn good one to add to your roster of reliable entertainment.