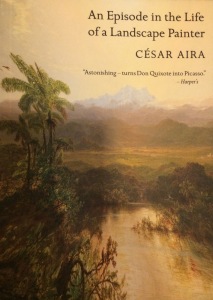 The Short Version: An Episode… recounts the story of one Johann Mortiz Rugendas, a German landscape painter who traveled to Argentina twice during his life. On that first trip, as he strives to capture something new, an accident changes and mars him for life – but also, perhaps, provides the door he had been seeking…

The Review: When is a biography not a biography? Presumably when it makes up facts – but what is the line between what is made up and what is true, when you don’t know the story to begin with? Take Johann Moritz Rugendas: he was a real painter. He really traveled to Latin America. A canny reader can discover these things through about fifteen seconds of Googling.

But the story recounted here, the destruction of Rugendas’ face and his consequent strange artistic adventure, has (seemingly) no basis in truth. If I hadn’t looked up Rugendas at all, would I have assumed that Aira made up the whole thing including the man himself? Or, perhaps more interestingly, that the whole story was true? Aira is consciously engaging with this uncertainty throughout the novel, interrogating philosophic questions as often as he is moving the story along. A line that stuck out to me from the last few pages of the book reads “Reality was becoming immediate, like a novel” – and it’s this simultaneity of “reality” and “novel” that informs the limbo that this novel lives in. If reality becomes more like a novel, but a novel is more immediate – and the novel that we’re reading is depicting a reality… what is then real?

The experience of reading this slim novel – novella, really, seeing as it clocks in at only 88 pages – is one of a constant opening or expanding. Things begin in rather small, ordinary terms and context: we’re given some background on Rugendas and the circumstances that will bring him to Argentina. The tone is conversational, but also relatively dry: it feels like ordinary non-fiction, like a short biography. But as the story moves into Rugendas’ travels, that same tone begins to shake and warp into something different. Yes, there’s still the sense of a biographer delivering to us a story… but it feels, now, more like a story than it does a biography.

I find it difficult to articulate the alchemy of Aira’s work here, for one thing because it feels entirely different from anything else I’ve ever encountered. I could not pinpoint the moment where my sense of the novel shifted, even upon going back over the text, and I think this is because there isn’t a single point: Aira is shifting the novel’s stance from the very start, so that nothing is quite what it seems to be. The novel’s true intentions, you might say, are veiled.

Speaking of veils, let’s move back to plot for a moment and discuss the fictional (or at least apocryphal) event that changes Rugendas’ life: the storm. This is a Lear-esque storm, one that seems the painter out on a heath of sorts without much in the way of sanity – but where lightning never deigned to strike the erstwhile king, it does strike poor Rugendas, in one of the most electrifying (sorry, I couldn’t help it) scenes I’ve read in quite a while. That pun is actually meant to be informative: the scene feels like Aira is, in fact, attempting to capture a bolt of lightning on the page – the crackle of it, the jagged lines we think of when we imagine one, the actual literal electric energy of lightning… it’s there in the text. We feel the transformative power of lightning in a way that nobody since Ben Franklin (and, honestly, maybe not since people stopped believing in Zeus) has felt. It feels primal and utterly otherworldly, which of course befits the impossible vistas surrounding Rugendas during this moment.

Aira then digs into what it means to be an artist, what it means to shape the world around you even as that world shapes you. We have, on the surface, the literal shaping of the man by the world – but we also have the more subtle things, the way that Rugendas is using these strange expanses to disrupt the traditional forms of painting that were then in vogue. And it seems somehow fitting that he, the scion of a line of war painters, would find a version of war to paint even as he’d become famous for landscapes: the battles with Indians out on the frontier.
A word about Indians: I had to remind myself more than a few times that this novel took place in Argentina and not the American West. Partially because of the use of the term Indian to represent a native tribesperson… but also because the novel feels largely, as it expands outward, like it is addressing and copping to the tropes of Westerns. As the Indian raid that consumes the final movement of the novel takes place and Rugendas rides out to paint these scenes, it’d be easy enough to pick up the novel and put it in Texas instead of Argentina – and that got me thinking about the various ways in which “the real world” is being interpreted in this novel. Because, you see, Aira is a native-born Argentinian. He is not Rugendas – and so we have an Argentinian writer writing the life of a German explorer. We have a modern writer delivering a work of history. We have Aira adapting the reality of history to fit his storytelling, leaving questions about what is “real” and what is not. We even have, within the novel, the ways in which Rugendas experiences and captures on the page the world he sees – and these ways change after the storm.

And yet, at the end of this slim volume, we also have a very simple smash-cut ending – one that captures a literal moment in the most literary of ways. The book’s ever-widening gaze seems to be about to widen out even further and then, instead, it snaps off like a light switch, leaving the reader in mid-thought even as the novel itself concludes quite cleanly. And now I feel as though it is I who have been struck by lightning. I can’t say, exactly, how I’ve been changed – but Aira’s writing shook something loose inside of me. I’m excited to find out what that means.

Rating: 4.5 out of 5. Something feels like it keeps it from being what you might classically consider “perfect” or “great” – but that something feels like a failure of my reading, not of the novel. It feels like there are still secrets to explore and discover here. I’m not sure what they are or if it’s actually that I just need to read more Aira (something I’m already making strides towards doing, having picked up two more of his beautiful, slim novellas) – but I feel changed in a way I can’t quite articulate yet. This was a fascinating and completely unexpected reading experience, one that continued to expand outward even after I closed the book.

(This review originally appeared at TNBBC – go give them some love!)