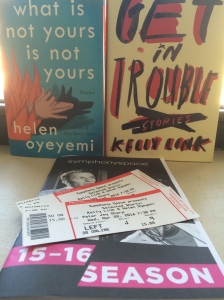 It’s been a while since I last dropped by Symphony Space for one of their terrific Selected Shorts evenings – but I couldn’t pass up the unbelievable double-whammy of Kelly Link and Helen Oyeyemi, so my schedule has been clear for months. The fact that Isaac Fitzgerald was guest-hosting just sealed the deal and so it was that I arrived on a nearly-warm, spring-has-sprung kind of night with excitement brewing in my heart.

Dani and I were discussing, as we grabbed a bite of Two Boots (a pre-Shorts tradition), which stories might be read. Would it be something from Kelly’s Pulitzer-Prize-finalist collected Get in Trouble? Or would they go with an old standby? As for Helen, which of the amazing stories from her collection, What is Not Yours is Not Yours, would they choose? My bet was on “Books and Roses”, seeing as it’s Sant Jordi Day on Saturday. I was, however, totally and delightfully wrong.

The evening opened with an introduction from Andrew Byrne, the artistic director of Symphony Space, and the immediate welcome of the ebullient Mr. Fitzgerald to the stage. If you’ve never encountered Isaac before, whether at an event or in his 6-second-book-reviews or on a podcast or at a bar, you simply must seek him out: there’s nobody else like him. He is a self-described cheerleader for books and his energy is infectious – the older subscriber segment of the Selected Shorts crowd was, I think, pleasantly shocked awake by the excitement he poured forth from the minute he stepped onto the stage. (Or so I heard the old ladies behind me saying, quite happily – they also thought his neck tattoo was cute, which is not something I ever thought I’d hear an old lady say but there you go.)

The authors popped out (a moment too early, to much amusement on everybody’s part) for a quick introduction, revealing that they’re both immense fans of each other’s work and from very early on – Kelly read the NYT review of The Icarus Girl and was hooked, while Helen sent a self-described “crazy fangirl email” to Kelly in 2006 seeing if Kelly was, in fact, a real person. They paused their conversation for the first story of the night, one of Kelly’s – “The Faery Handbag”, a choice I hadn’t expected but was delighted by – as read by Kirsten Vangsness.

Vangsness commanded the stage with terrific comic timing and smooth accent transitions – it’s not often that a reader can pull off an accent let alone keep it steady throughout the entire story and unbelievable props must be given (as Isaac did later) to her pronunciation of Baldeziwurlekistan and its various breakdowns, as she did not stumble once (at least that any of us noticed). The story, if you haven’t read it, is one of Link’s very best – and although it ran a little long in the reading aloud, everybody was super forgiving because of how exceptional the story is.

After the break, the authors returned for a little chat with Isaac. Kelly got in one of the best lines of any Selected Shorts, when she said that she doesn’t like to read aloud or re-read her own work… but “it turns out it’s really fun to have others read your work to you.” They talked about Kelly’s Pulitzer-finalist status (“I don’t know what they were thinking,” she demurred) and Helen’s early reluctance to try the form vs. her absolute mastery of it in this collection. One interesting tidbit, for those who haven’t read the collection, is that she wrote it with a theme in mind: keys. That’s in the jacket copy, yes, but it’s a little interesting to discover that she was working up these stories with the theme in mind – that this collection is linked, in a way, and not just a normal “oh you have enough to collect!” collection of short stories.

The love fest – for that’s what it was, three people who genuinely adore each other and each other’s work talking about exactly that – continued for a while on such diverse and hilarious topics as emails and the ethics thereof, a return of The Twilight Zone (#bringbackthetwilightzone), and more stories of early meetings. When the conversation ended, Colby Minifie took the stage to read the surprising choice of “Dorniçka and the St. Martin’s Day Goose” from Helen’s collection. In some ways, this story made the most sense as it fits more squarely into the vein of Helen’s adapting fairy tales and folklore into modern twists – this story being an odd and skewed take on Little Red Riding Hood. The best thing about it was that, thanks Minifie’s strong performance, it made me understand the story better and get deeper into it than I did on that first reading. Perhaps that’s because of what Kelly had said, about the way hearing a story aloud changes it. Perhaps it’s just because it was a great story, well-read.

Either way, I would’ve sat there and heard another several stories – which is always the magic of there being another Selected Shorts not too far away…