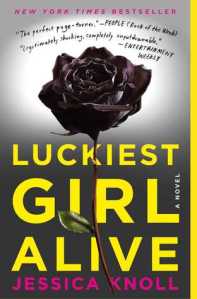 The Short Version: TifAni FaNelli seems like she has it all: great job, great fiancé, great body, great life. But she’s scraped her way to this place after not one but two harrowing events in high school shattered her childhood forever – and with a documentary in the works and her wedding on the horizon, she must face not only her past but herself… whoever that really is.

The Review: The true twist of this book, which is to say the moment that nobody has prepared you for in any of the reviews or blurbs or copy that you’ve read, sneaks up on the reader with such a light step that I had to stop and re-read that moment three times. I felt dazed, shell-shocked, gut-wrenched. What I had understood to be a novel about one thing was, in fact, a novel about so much more. On paper, it would seem a risky proposition to tackle something as hot-button as rape and then add on top of it something equally as harrowing… but Jessica Knoll, in a feat I’m still reeling from, mostly pulls it off.

TifAni is, in fact, the luckiest girl alive – although she, perhaps, makes her own luck to some extent because she knows exactly what it means to be unlucky. She’s booted from her Catholic school, after being wrongly fingered as the leader of a non-existent drug ring, and sent to the Bradley School, a prestigious Main Line private school (based, quite clearly, on the Shipley School), just in time for high school to start. And boy oh boy, don’t we all know that high school just freaking sucks. Kids are, without a doubt, the worst to themselves and to each other at that point in time and, in the name of education, we throw them together with surprisingly minimal supervision and somehow expect that they’ll all be perfect human beings to one another.
What a crock of shit, am I right?

There is a looming sense of dread in the early going of this novel, because we know that something terrible is coming and Knoll has her foot on the gas. I, admittedly, already knew what that something terrible was after reading Knoll’s powerful essay “What I Know” in advance of reading the novel – and so I knew, as these horrible moments of rape and slut-shaming played out for TifAni, that they’d also happened to Jessica herself. For once, I think the knowing in advance actually made the impact all the stronger – because I wasn’t able to stop it. I could not look away but had to keep reading and had to go through it all with TifAni/Jessica. It made me wonder who out of the people I went to grade school with went through something similar – because it is, statistically, certain that at least some of them did. It made me wonder if I knew, if I’d heard about such things, and how I treated those rumors. I felt a wave of sorrow wash over me while reading the first half of the novel, a sorrow cut with anger, for how terribly even the adults in TifAni’s world treat her. And I understood why she wanted to be somebody different in her present-day world, in the world where we can reinvent ourselves. Ani is not TifAni, but TifAni contains Ani – and I knew that a reckoning was coming.

There was a moment about 80 pages into the book when Ani, whose narrative voice is strong and immediately something-less-than-trustworthy (only because we immediately aren’t sure if she even trusts herself), won me over and, simultaneously, I began to narrow my eyes at the book and try to figure out its secrets: when Ani, describing one of her coworkers at The Women’s Magazine (which is Cosmopolitan under a pseudonym), says: “Come on, there has to be a requisite bitchy gay fashion editor.”
Perhaps this wasn’t the first moment in the book where she seemed to be speaking directly to the reader – but it was the one that struck me in terms of the crafting of a narrative. We’ve all seen/read The Devil Wears Prada and so we know exactly what Ani is saying to us. We know the story she’s crafting and it’s this sort of direct-address in the form of an aside, a nearly-humorous one, that tips off the reader that things are not exactly what they seem.

The trick of the novel is that our expectations for what is not exactly as it seems are entirely subverted. There’s this documentary coming up that Ani has been invited to be a part of and we are led to believe that it has to do with her assault, or maybe it’s even just about Bradley and she, as a high-profile graduate, was an obvious choice to participate and she’s going to use the documentary to set the record straight. When the novel is both metaphorically and, in the narrative, literally blown apart, a massive recalibration has to take place on the part of the reader and it left me looking at the rest of the novel as though I’d spent the first half off-level and, now having been righted, I had a bit of the leans. SPOILERS AHEAD, FYI – I encourage you to avoid them if you haven’t read the book but I can’t let this review close without discussing them a bit. If you want to avoid them, jump to the Rating at the end.

When this shift occurs and the novel goes from being about a rape survivor to being a girl who survived not just rape but a horrific school shooting… it becomes almost an entirely different novel to talk about. Our present-day Ani, with all the myriad complexities and fights that’ve made up her life to this moment, suddenly becomes much more pitiable – something I don’t know that you’d consider the early-half Ani, who is sharp and angry and strangely off-putting. The fact that the big “reveal” of the novel was not a traditional thriller reveal of withheld personal information (e.g. Gone Girl or Black Chalk) but rather a moment that reframes the entire story by making it about so much more than one girl’s personal struggle while simultaneously taking us through this larger story via that one girl’s personal struggle… it’s tremendous work, really. I find that I can’t shake it, even some days later, the way that the shift made my stomach drop.

The only thing is, that reveal somewhat undercuts the present-tense action. Yes, we see how going home and doing this documentary offers Ani an opportunity to come to terms with her past – and we even see how she can (and, wonderfully, does) use it to shake off the things she thinks she is “supposed” to do in order to succeed and survive. She’s already survived and can go just… be herself, which is exactly the sort of messy happy ending the reader wants the story to have – but something about all of it feels a little anticlimactic, now that all the anger and instability have been given a sort of explanation, once it is revealed just how frightened Ani is of the world. Any dislike the reader might’ve had for her has not only been washed away, but now we’re angry at everybody else in her life for being so awful to someone who has gone through so much at such an early age. As a result, the ending feels a little bit rushed in an attempt to finally have Ani break her shackles entirely. There’s a sense, to the reader, that the past was more interesting than the present – which is not the sense we get in the early going.

Rating: 4 out of 5. The front cover pull-quote on the paperback from EW, calling Luckiest Girl Alive “legitimately shocking”, is absolutely accurate. The narrative around the book is one thing and you start reading it thinking that it is totally going to be a book about not just rape but how the victim then reclaims her life in the present. When Knoll expands the scope of the novel in a single, harrowing sequence, everything you thought it was about shifts – and that’s one of the most impressive magic tricks I’ve experienced in a book in quite some time. The rapid expansion causes some bubbles in the storytelling and the writing, but it ends up not mattering all that much, because you weren’t meant to remember this book for how Ani gets to the place she is at the end of the novel – you’re going to remember it for how vividly it paints the picture of trauma and the lingering effects of teenage awfulness. (And, if you’re a Philly-suburbs person like me, you’ll immensely enjoy the accurate portrayal of the Main Line.)