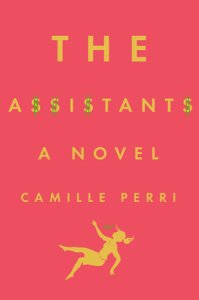 The Short Version: Tina is the executive assistant to the founder of Titan Corporation, a multinational media conglomerate. When an accounting mixup offers her the chance to pay off her student loan debt, she does the unexpected and takes it – but another assistant notices and so the two fall, intentionally or otherwise, into a Robin Hood-esque scheme to help girls like them. Now they just have to make sure they don’t get caught.

The Review: I was an assistant for just under a year, to an agent at CAA. It was, as those who know me personally can tell you, one of the bleakest periods of my life and while I know plenty of people who’ve excelled as assistants and gone on to do amazing things… the other stories are the ones we hear more often. You’ve probably seen The Devil Wears Prada or heard about the poor sods who get Blackberrys flung their way on a regular basis by Scott Rudin. And let me tell you: everybody who has ever been an assistant, even the ones who really like their jobs and/or excel at them, has dreamed of rising up and taking over as boss. She was once an assistant too (to the editor-in-chief of Esquire) but regardless of whether or not she liked her job/wanted to stick it to her boss and/or corporate overlords, Camille Perri has written a bold millennial entry into the grand tradition of assistant-revenge tales.

What separates this book from its potentially “chick lit” trappings (and there are admittedly some of those, although I’ll get to that in a minute) is its ever-more-timely connection to the burgeoning socialist leanings of the under-35 set these days. Look, I’ll make no bones about my own politics: I have a subscription to Jacobin magazine and work for one of the foremost sociopolitical radicals (Oskar Eustis) in the country. The gap between the haves and have-nots in this country (not to mention around the world) grows starker by the minute and, while I’d love to see a Bernie Sanders presidency, I think we’ve still got a ways to go before true socialism has a shot in this country. Because the ones with the power are the ones whose money we want to, ahem, redistribute – and the thing about money is that, apparently, once you have a lot of it, you’re pretty reluctant to let it go.

Which brings us to the driving force behind Tina’s transgression in this novel: student loan debt. She doesn’t want to be rich, she doesn’t want to buy herself a pair of thousand dollar shoes or splurge on dinner at Eleven Madison Park – she just wants to be free of the crushing debt that constricts her ability to just, you know, live. And there are others just like her, so when she and Emily (her initial partner-in-crime) start to turn their initial scam into something more honest, that’s who they decide to help. It’s a refreshingly low-key dream and one that feels actually achievable: a charity, essentially, that helps eliminate student loan debt for young women. You can raise the question of “wouldn’t this money be better spent helping solve world hunger or curing cancer” – but I appreciated the smallness of the idea. It’s a tangible and immediately noticeable change, debt relief, and while it also ends up fitting into a comfortably capitalist worldview (without debt, you could buy the things you want, someday own a house or a car, etc etc), there is a sense that if the playing field was leveled just a little, the ripple effect might be more than you could ever imagine.

Speaking, however, of ripple effects: Tina’s excellent plan comes with ripple effects of its own, personally and professionally. Perri keeps the stakes high throughout, especially the underlying tension that Tina’s boss may at some point discover the financial indiscretion. Tina’s relationship with her boss is fascinating in its own right, actually, because Perri portrays far more realistically than I’ve ever seen the way that a really great assistant becomes a crutch that the assisted cannot function without. Wife, therapist, calendar, IT support, bartender, problem-solver… the only role that an assistant doesn’t ever quite fill is “friend” and that is the very tricky paradox that’s displayed so well here. A day trip with some high level executives to Tina’s boss’ summer house is one of the best scenes in the book, revealing Perri as a keen observer of relationships on all levels – it’s one of the best sequences I’ve read so far this year.

Of course, the book isn’t just an 9 to 5-esque caper where some an oddball assortment of plucky young women fleece their rich bosses – it’s also the story about a young woman trying to find a balance between work and life in New York City in the 21st Century. As a result, it might be labeled “chick lit” and Perri is savvy enough to lean into that. There is a handsome love interest (nicknamed Kevin Handsome), impassioned arguments with tempestuous reunions (between lovers and between friends), sassy observations on millennial life, and just generally a bunch of scenes that are waiting for the inevitable casting of someone like Anne Hathaway (although not her, at this point; she’s already done her assistant film) and that will make a very solid, enjoyable, rewatchable 90-minute date movie. But as with I Take You, there is a subversion at play here: Perri is taking these tropes and doing something new with them, twisting them to apply to a modern perspective on life, love, and the pursuit of happiness. It’s not all about getting the guy; it’s about being your own damn self and being proud of who you are and what you do, what you contribute to the world. If you’re a guy and you can’t get behind the message (let alone get won over by the snappy prose and smart economic bent), then you need one hell of a wake-up call.

Rating: 3.5 out of 5.  With a sharp and funny voice, Camille Perri has written a Robin Hood tale for the assistant set and drilled deep into one particular stream of income inequality that resonates with, I’d wager, just about everybody who graduated from college in the last ten-fifteen years. If you’ve ever been an assistant to somebody who couldn’t tie their shoes without you, but who made exorbitant amounts more than you – especially if you’re a woman in that role, although as a guy who has been there, I think all gender orientations will find something meaningful here – then this one is worth it. And if you have college loan debt that you someday wish to pay off and have maybe considered extra-legal means of doing so… this one is also for you.
And most importantly, it’s for you if you’ve ever dreamed about making the world better no matter where you’ve come from.