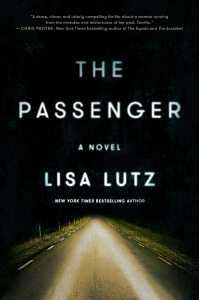 The Short Version: Tanya Dubois didn’t kill her husband, but when he falls down the stairs and dies, she flees the scene – but it turns out she’s been running for years, picking up names & identities and discarding them as needed. As she travels the country, trying to stay off the grid and stay alive, her past is always one step behind her…

The Review: This one nearly slipped past my radar, somehow. I heard only early this year that Lisa Lutz, author of one of my all-time favorite series (The Spellman Files) and of the superb standalone How to Start a Fire had written another standalone – this time, a straight thriller. I was intrigued, curious to see if her delightfully dry sense of humor would make an appearance (it does, although muted), if the rich characters she normally creates would appear in the leaner bounds of a thriller (they do), and if there’d be any footnotes at all (there weren’t, except one in the acknowledgements). The strongest thing I came away with was that Lutz is a master plotter, able to write both a winding story about friendship/family as well as a straightforward rocket-blast of unstoppable momentum in one person’s life.

We pick up at an awkward moment for our heroine: her husband lies dead at the bottom of the stairs and she is assuring us, immediately, that she didn’t do it. Naturally, it’s hard not to be a little suspicious – especially because she picks up and runs, without calling the cops or really doing anything at all that would point to her being not guilty. Maybe she’s innocent of his death but she’s guilty of something, somewhere – and so the book kicks in. We follow this woman, first known to us as Tanya Dubois, through several more identities and crisscrossing the country as her luck goes from bad to worse: she’s able to get a new identity from… someone, but she warns him not to try to kill her? She falls in with another down-on-her-luck woman, also living a new life, and ends up an accomplice to murder after an attempt on her own life. She’s living on the margins and there is a sense, throughout the entire novel, that her world is shrinking inexorably towards a point – kind of like when you’re about to pass out and your vision begins to letterbox until it suddenly disappears.

But Lutz can’t shake the lessons she’s learned in her other books – and every single character who comes across “Tanya”‘s path is not just named, they’re vividly rendered in just a few moments. I’m not just talking about the major characters, like Blue and Domenic – I’m talking about the ones who appear for only a few lines in some bar in some out of the way town, or the supporting-supporting characters who only get a few words of description as the scene takes them in. Lutz has a gift for making all of the lives that slide through these pages feel real and it’s all the more impressive when you realize that she’s often able to play with the flow of time and slow down the otherwise-relentless plot in order to have some very human moments that serve to illuminate how “Tanya” isn’t the only broken one in this world. The section entitled “Paige”, when Tanya slips into one of her last few lives, should be studied in writing classes for its brevity and its weight and the way that the dialogue and movement reveal so much in such a short amount of time. The twist at the end is nothing short of masterful and the section could, I think, exist as a short story all unto itself.

In now-traditional thriller style, we’re given some clues between chapters about the life that Tanya – going, then, by Jo, it appears – used to live. All the way back in 2006, ten years ago, we pick up a chain of email correspondences and those are scattered throughout, bringing us ever closer to the present. Who is Jo, though? And who the hell is Ryan? And how do they connect to this story? Lutz even gets in a nice surprise when we discover that Tanya’s name isn’t Jo, at least not really/entirely – and she doled out information at just the right rate to keep me off-balance while also not feeling like I wasn’t getting the whole story when I needed it.

The one thing I really did miss as compared to Lutz’s other work is the sense of humor. It’s not to say that this book isn’t funny – it is at times, often in the descriptive work – but the Spellman books and even How to Start a Fire had a lighter attitude towards the world at large, whereas this book is bordering on bleak at times. That comes, I would suppose, with the marginal existence of our main character: plenty of people do live on the margins, eking by in a country and a system that is stacked against them… but reading about it isn’t the happiest of things, you know what I’m saying? Even as other characters, like Blue and like the second pickpocket on the train or like the teachers and residents of the dying Wyoming town, come across the story, we see that it’s not just Tanya’s life – it’s nearly everybody’s. There’s an underlying sadness to this novel, a sense that the “greatness” of America – the promise of the dream, etc – has maybe never existed for many people in this country and that very little will ever change that. They will live their lives of quiet desperation and that will be all.

And when Tanya’s backstory is finally entirely revealed – the reason she’s on the run, the reason people have tried to kill her and that she’s become this near-feral animal, just trying to stay awake and alive even as the world closes in – it’s pretty damn awful. Even the final twist, slipped in for good sudden-exhale-of-breath measure, is just the worst in the context of the life that Tanya has had to live for the last ten years. All of her actions become understandable, if they weren’t already, when you realize what she was put through: she had to defend herself, her life, the only way she knew how.

Rating: 4 out of 5. Even through the darkness, Lutz has a firm headlight trained on the road. She’s guiding us with ease and aplomb through the winding maze of highways that stretches across this country – and while I look forward to another, lighter novel from Lutz, I also wouldn’t be upset if she kept delivering thrillers like this one. You’ll consume this one in a day or two, especially if you’re stuck inside over a rainy weekend – and if this is your introduction to her work, you’re in for a treat when you discover the backlist. If you’re already a fan, this’ll just prove that she’s as talented as you thought, even when she’s stretching outside of her usual fare.