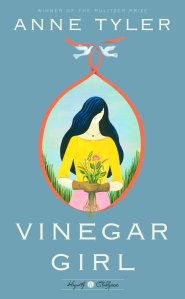 The Short Version: Kate Batista is a strong-willed woman nearing 30. She went from being a promising biologist to being a college dropout, taking care of her doddering scientist father and bubbly, boy-crazy younger sister – and she doesn’t quite know what comes next. Meanwhile, her father’s research assistant’s visa is about to expire and so the two men cook up a plan to keep Pyotr in the country. All they need is Kate to agree to marry him…

The Review: The Taming of the Shrew is a tough play. I saw the 2008 RSC production, which used the Act One framing device to help mitigate the rampant misogyny of the ending (too difficult to explain here, but google and you’ll discover) to moderate success – and the all-female version currently playing in Central Park under the direction of Phyllida Lloyd brings its own intriguing turn to the play, too. I’m not one to write the show off entirely – I believe that we can present complicated works of art without endorsing the behavior presented there, although that may be too high a hope – but I do understand the difficulty in presenting it these days. I mean, the whole play is about shaming, to the point of straight-up emotional abuse, a young woman who speaks her mind and maybe doesn’t want to get married just yet.

Anne Tyler, then, is an interesting and exciting choice to cover the play for the Hogarth Shakespeare series. I’ve shamefully never read any of her work (a fact I’ll be swiftly remedying, by the by) but I’m well aware of it – and, specifically, its continual return to marriage and family life as a focus. Shrew is maybe the most complicated play about a marriage until Who’s Afraid of Virginia Woolf? and I was immensely curious to see how it could plausibly be adapted to fit in a modern world. Would Kate put her hand under Petruchio’s (or, here, Pyotr’s) boot? Would the headstrong woman turn into a battered and exhausted wife? And, if those things were to happen, how on earth would Tyler make it palatable for a 21st century audience brought up on feminism?

To answer the last, anyway, she makes the play palatable by making her cover something of an “inspired by” as opposed to a straight cover, like The Gap of Time. There are certain elements that those familiar with the play will recognize from the get-go: the younger sister attracting all kinds of admirers (including one who makes it past the watchful eyes of Kate under the pretense of being a Spanish tutor), the well-intentioned if completely infuriating intentions of Kate’s father, and even a little bit of the psychological gamesmanship that makes the final two acts of Shrew so tough to swallow these days. But Tyler isn’t interested in slavishly recreating the play – and so the conceit of making the proposed marriage not a wager but an attempt at a green card… well, it’s nothing short of inspired. This simple change makes Pyotr likable and potentially somebody the reader could care about, for one thing, as opposed to being just a total asshole like Petruchio is in the play. But also, it opens up the possibility that Kate could plausibly fall for this guy by just being something that sounds imminently real. If you removed a couple Shakespearean specifics from this novel, it would still stand up as a meet-cute romantic comedy. (In fact, if the rights are still available, I’d like to inquire, as I think this could be the romcom of summer 2018…)

Kate, too, is given the attention she deserves here. Shakespeare wasn’t awful with writing female parts, but he also gets more of a pass than he sometimes should: women are all too often ancillary or supporting roles in these plays, no matter how powerful or awesome their turn on the stage might be. So to have an author writing this story not from the male point of view but from Kate‘s, we are again given an opportunity to see how even a ridiculous and infuriating patriarchal move could blossom into something unexpected. And Tyler’s Kate is an inspired creation: she’s sassy and fun and she’s a preschool teacher (or teacher’s assistant). As the novel went on and the story turned away from the school, where several early scenes are set, I actually found myself missing the gentle comedy of the interactions between the kids and Kate – the young boys with a crush on her, the way she talks to them like they’re adults and the way the rest of the staff (mostly older women) find that horrifying… I’m not saying it’s not cliché but Tyler delivers it with a grin and the lightness of a summer’s breeze.
So, too, does she deliver on the awkward non-courtship between Kate and Pyotr. Their moments of missed connection and awkwardness do have a certain charm about them and the plausibility of their someday developing a romantic connection is fully realized. There are moments recalling, in the best possible way and I realize this is an odd analogy, Hermione and Victor Krum. Kate’s father, too, is a bumbling delight, constantly trying to take photos of the “couple” and always mentioning how he wants to make it look good for Immigration.

The only real problem is – and I realize that this was perhaps destined to happen with this story, no matter who took it on – that the change of Kate’s mind occurs all too quickly. Bunny, the younger (and seemingly without much of a brain) sister, surprises everyone (including the reader) by being the one to call out how odd it is that Kate has decided to go along with this plan and how Pyotr isn’t the best guy by a long shot. And the reader, it has to be said, is right there along with her: Kate, who has given every indication up to this point that she is a strong & independent woman, appears to’ve lost her mind with no rhyme or reason behind it. The transition is redeemed, to some extent, by the epilogue – but Tyler retains Kate’s big monologue, the one where in the play she offers to put her foot below her husbands boot (she does not offer that here) and generally says “look, men have it really hard and maybe we ought to be nicer to them.” There’s an attempt at mitigation when Kate says that she’s not changing her ways but rather wants to invite her husband into her world – but it doesn’t quite land, especially in the knowledge of what that scene was in the original text. The mysterious shift in Kate’s mind is chalked up to something a little like love and while Tyler presents the couple, in that aforementioned epilogue, as two equals going through life together… I just wish there’d been a little more of that in the last 50 or so pages of their ‘courtship’.

Rating: 4 out of 5. I’m pleased that Hogarth didn’t go the route of putting Taming in the hands of somebody who’d bring out the acerbic nature of the story, for that feels both too easy and too dangerous. Anne Tyler delivers a cover that seems, at times, to be a light comedy – which, let us not forget, is how Shakespeare’s play is categorized – but that also paints a complicated portrait of feminism and the patriarchy, pushing up against what we (here meaning like-minded liberals/feminists) believe to be okay (is it right that Kate accept this marriage in order to escape the house she grew up in, to use it to springboard into what she hopes will be her actual life?) while also making very clear that the concept of the subservient woman is beyond outdated and should be destroyed accordingly. I do wish it had gone a little farther, both with continuing some of the early comedic bits that are dropped along the way (the children! bless them) as well as digging further into the nitty-gritty of why Kate comes around. Still, the novel goes a long way towards redeeming a text that many people these days think to be completely reprehensible – and that alone is an accomplishment worth celebrating.