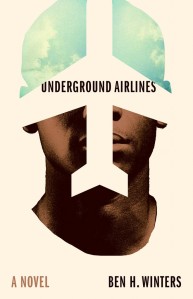 The Short Version: Victor is a middle-aged black man working for the U.S. Marshals as a sort of bounty hunter – a bounty hunter of escaped slaves, in a present day where the Civil War never happened. When his latest case begins to spin out of his control, he finds himself in a position to potentially do something great… maybe even great enough to change the world…

The Review: Imagine, if you will, a world where Abraham Lincoln was shot the day after he left Springfield, where he never got to be President. A world where the Crittenden Compromise was ratified into law and slavery continued to exist in the United States of America – even to the present day, in four hold-out states in the South. And imagine that, beyond this, not a whole lot looked remarkably different from the world we live in today.

That’s the Twilight Zone episode that is Ben Winters’ audacious new novel, the follow-up to his literally-world-ending Last Policeman trilogy, and above all it proves that Winters has a hell of a way with the dark side of the speculative. A world going to hell because an asteroid is incoming is just about as bleak as a world where slavery wasn’t abolished in this country, only in different ways – and Winters, through some masterful control of noir tropes, crystal-clear imagination, and compelling writing in general, turns these shoulder-tensingly dark plots into utterly compelling reading.

I’m not a big reader of alternate histories – I never got into the Harry Turtledoves of the world and have often found more quote-unquote “literary” alt-history (like The Plot Against America) ultimately better in concept than in execution. But something about this one grabbed me, like it was grabbing my shirt collar and shaking me. Perhaps it was the introductory epigraph, quoting the Crittenden Compromise and immediately destabilizing my sense of the world. Or perhaps it was how Winters was able to hammer home, very quickly and forcefully, the ways in which this world looked nearly exactly like ours – before letting it expand out and revealing the ways in which things are different – and the fear I felt, deep in my gut, at that near-mirror I saw in these pages. At the end of the first chapter, Victor is stopped by a roadside checkpoint while driving at night. For no real reason other than that he’s a black man – because, in this world as in ours, driving while black is enough to get you killed. And right there, a sentence after the reveal that Michael Jackson exists in this world and that Thriller is just as badass as ever… well, it’s hard to top such a head-spinning intro.

The hardest thing to grapple with, throughout reading this novel, is that similarity to our world. Because how could a world where slavery is still legal in four states (the Hard Four, they’re called) be anything like ours? And Winters makes a point to show, as the novel goes on, how the two worlds diverge: a war with Texas instead of Vietnam, trade embargoes from most of the civilized world, the way different musicians and performers lives played out… it seems almost like Easter eggs sometimes, like a little “ooh, isn’t that interesting” difference to spice up the story, except that each of these moments is honestly welcome to the reader because it helps jar you out of the sense that this might actually be the world we live in. Finding out that James Brown was born a slave, fled to Canada, and then made a career touring the rest of the world but never coming back to the States… not only is that a fascinating twist on a tale we all know, but it was a reminder to me that this novel wasn’t depicting my world and I frankly needed that.

For all its ambitious invention, the novel itself is actually remarkably old-fashioned: it’s definitely, as previously mentioned, some classic noir. I was reminded, more than anything, of Chinatown several times throughout the novel and thought we were headed for just such an ending several times more. There’s a dame, there’s a MacGuffin, there’s a case that seems to be one thing but is really something (or several somethings) completely different – all the usual suspects, you might say – and while I was surprised by the traditional bent the novel ended up taking, I was also surprised by the ways in which that traditional form of storytelling seemed fresh under this strange new light.

Rating: 4 out of 5. There are moments where Winters’ high-concept high-wire act wobbles a little bit – but they’re few and far between in what has to be one of the most ambitious (and frightening) novels I’ve read in a long time. To make an America where slavery still exists seem so… plausible is downright jarring – but what’s really destabilizing is the way this book makes you look at the world outside when you put it down. As civil rights are systematically stripped from various parts of the population and as a mouthpiece of the worst of our humanity makes his way towards the White House, the fact that Winters’ fake-history and our real history seem altogether too close for comfort is enough to give you nightmares. But he also makes sure that the story isn’t overwhelmed by the world and there’s never a moment that the reader isn’t deeply compelled by the struggles (both internal and external) faced by the man we know variously as Jim, Victor, and Brother. It’s an incredibly impressive piece of work meant decidedly for right this very moment.