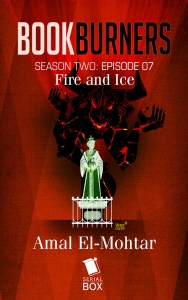 When We Last Left Our Heroes…: Liam and Grace headed to Shanghai to recover the artifact the Maitress suggested might help them repair the Orb. They were successful but also opened up some wounds of the past that might take a while to heal…

Case of the Week: Team Three must head to Ottawa to investigate a strange disturbance in the Parliamentary library leading up to the 100th anniversary of a fire that destroyed the old Parliament.

How It Went: This week’s installment begins in the immediate aftermath of a successful Team Three adventure – although they’re all a bit battered and bruised, including a broken arm on Grace. But they’re back at the Vatican and, as Sal puts it, there’s a moment of feeling nice about how ‘normal’ the experience was. Normal being relative, of course. But the idea of the team working together and doing their thing again without any of the tension that’s been surrounding them for the last while… sounds like it was pretty nice. It also involved a frost demon, which is pretty cool.

Asanti arrives to say hello to them as the doctors finish checking them out and explains that she has another gig for the team already: an old friend of hers in Canada has reached out in the wake of some suspicious occurrences that seem like they might require some outside assistance. She briefs Menchú on the situation and after yet another tense interaction between the two, a thaw seems to begin. As we’ve seen previously, they still care about each other – and despite their struggles to not use metaphors and speak plainly, they manage to get that across. It’s a nice moment between them in a season that hasn’t had many of those.

She gives the team the rest of the brief: they’re headed to Ottawa, to the Parliament building. Nearly a hundred years ago to the day, the building burned down except for the library, and so this apparent haunting seems all too coincidentally timed to be, well, a coincidence. Liam is suspicious of the whole thing, thinking it’s probably a waste of time – but Asanti trusts the source and so here they all go. Grace is tagging along, too – but, she insists, for vacation and not work (that broken arm can’t be healed while the candle is out). There’s a great moment for the four of them where, as Liam and Sal are nudging and teasing Grace about her choice of vacation locale, she reveals that she really wants to attend Winterlude, which is not only a real thing but even cooler sounding that the book made it out to be (which was pretty cool). Also, I promise those weren’t puns about the cold.

Anyway. They arrive in Ottawa and are greeted by Asanti’s friend Jeanne, who miiiiight be more than a friend? There’s an unfortunate recurring goof about their interest in fish being a euphemism and it felt a little tonally out of sync with the rest of the piece… but regardless, Asanti and Jeanne go to catch up while Aisha, a work-study intern at the library, takes them on a little tour. There’s a moment of culture clash, or at least unthinking insensitivity, on Sal’s part when she asks Aisha about her religion – and it’s a neat piece of foreshadowing for what’ll happen later.

The Team gets the scoop on these mysterious “hauntings”: apparently the motion sensors keep going off and things briefly go a little haywire but there’s nothing to be found on any cameras or in the building. So, naturally, they decide to have a sleepover in the space to see what they can discover. Liam heads out to collect Grace, who is blissfully skating down the river, and the two have a nice moment of debrief on Shanghai as well as cementing a shared vocabulary of experience on missing parts of their lives. It’s different for the two of them, obviously, but they also have more in common than not when it comes to gaps in time.

Anyway, about two seconds into the sleepover, a fire demon shows up and they fight it… only for it to disappear, the damage it did disappearing with it as well. Sal also spotted a hummingbird? Naturally they are curious as all get out and so they come up with a plan to capture the fire demon the following night. This goes about as well as you’d expect and they end up capturing the hummingbird instead… which turns out to be Aisha! And the demon is an ifrit!

Aisha begrudgingly explains some things to the Bookburners and there’s a really potent monologue from her – a young Muslim woman – about how the Vatican (the Bookburners in particular but also even more broadly referring to Christianity and, I’ll just say it, white people in the West in general) rush in without taking time to understand the potentially different cultural contexts around the world. Aisha’s family has been helping creatures from other planes – the beings that the Team is so quick to lump together as demons – transition safely into this world, serving essentially as a magical IRC. It turns out her great-grandmother was at the center of the original library fire when some fool accidentally (or at least unknowingly) summoned an ifrit into this world – and that the Bookburners who showed up a hundred years ago misread the situation not once but twice and were largely the ones who caused the fire and the deaths and the damage that was done. She bought the world a hundred years basically and fled, instructing future generations that they’d have to come back and deal with this ifrit then.

This also means, however, that the ifrit can’t come back into our world without causing some massive devastation – because it’d bring back all the stuff it originally burnt down. Like the old Parliament. Which would drop into place over the new Parliament. So the team helps Aisha parley with the ifrit, knowing that their failsafe plan is for Aisha to effectively “become” the book that they could capture and destroy. (It turns out that the magic in her family is passed through the oral tradition, a curious development for magic in this world and one I’d like to know more about – as, I’m sure, do Asanti and Menchú at the very least.) It all goes smoothly, however, and the Bookburners mostly just sit by for a rather somber exchange between the ifrit and Aisha, who puts it back to sleep again promising that she’s going to try to figure out a way to not kill the thing or anyone else and achieve a peaceful resolution. All in all, everyone’s a little disappointed in how this went down – not because they didn’t get to do some ass-kicking but because it just all happened in ways that they might never have considered these things could happen.

The Bookburners head back home and there’s a lovely closing moment of some sorely needed relationship repair: Asanti and Menchú split a bottle of maple whiskey, Sal and Liam talk as friends for real, and Grace has a reflective moment of realizing how lucky she is that she can come out of her flame any time someone needs her. Here’s hoping the team will again be a little more of, well, a team sooner than later.

Amal El-Mohtar has received the Locus Award and been a Nebula Award finalist for her short fiction, and won the Rhysling Award for poetry three times. She is the author of The Honey Month, a collection of poetry and prose written to the taste of twenty-eight different kinds of honey, and contributes reviews to the LA Times and NPR Books. Her fiction has appeared most recently in Lightspeed, Uncanny Magazine, and is forthcoming in The Starlit Wood anthology from Saga Press. She divides her time and heart between Ottawa and Glasgow. Find her online at amalelmohtar.com, or on Twitter @tithenai.