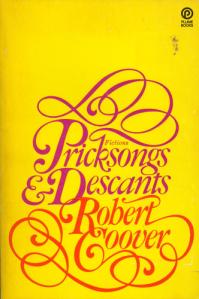 The Short Version: A series of strange and wild tales, with elements of fairy tales, mythology, horror, and more – but all wrapped up in a puzzle-box of metafictional style, creating one of the most distinct reading experiences readers have ever had.

It’s a little strange to think about metafiction as a “new” concept, as for a reader today it seems to’ve always been around. Just off the top of my head, Mark Z. Danielewski, Alexandra Kleeman, César Aira, Alvaro Enrigue, Angela Carter, and plenty more have produced fantastic work by slipping the bonds of the realist novel or story and instead creating something that shifts under your gaze, squirming against being pinned down. So I can only imagine how seismic the shock must’ve been when Robert Coover’s first collection landed in the early 70s – because it’s still wildly potent today, even for a reader familiar with brain-teasing metafictions.

Rarely have I ever read a book that requires the reader’s brain to be so engaged as it must be here. Those authors mentioned above have qualities of that requirement but Coover is, as I think many of them would agree, on a different level: this book is a puzzle that will actively resist the reader instead of just attempting to trick them or mislead them. Take even the first story, “The Door: a prologue of sorts.” We are immediately on somewhat recognizable turf: mention of a beanstalk and a man named Jack, a Beauty and a Beast, a girl in a red cloak going to visit her grandmother. But there is something off about each of these tales, tales which are all somehow connected possibly. We’re introduced to something that we know and then immediately that understanding is ripped out from under us like a tablecloth magic trick, leaving us still standing but a little wobbly and on a different surface than before.

This only gets more intense as the collection continues. “The Magic Poker”, “Quenby and Ola, Swede and Carl”, “The Elevator”, and “The Babysitter” are the best examples of Coover’s relentlessly shifting terrain: a paragraph will introduce an idea or move the story forward only for it to be rewritten or altered in the ensuing paragraph. “The Babysitter” does this the best (there’s a reason it’s one of the most anthologized stories of all time), introducing the story of a young girl watching three children and presenting full storylines where: her boyfriend and his friend come over and rape her, where the children strip her naked and tease her, where the night plays out ordinarily, where the father of the family comes home and joins her in the bath, where the baby drowns, where everyone is murdered… and probably several others, come to think of it. There’s no terribly logical order in which these tales develop, no secret trick that’ll allow you to say “ah ha!” and grab its reins; they move with their own internal energies and the reader must simply keep up.

Not all of the stories are so structurally confounding and aesthetically dazzling, although some are one or the other. “The Sentient Lens” is one of the best depictions of camera movement I’ve ever read, reading not like a description of a film but actually capturing the particular way the camera can deliver story, and “Morris in Chains” is a delightful precursor to confections like The Pickle Index, featuring a hilariously totalitarian state attempting to hunt down a rogue sheepherder who moves randomly and inexplicably through the city parklands. The “Seven Exemplary Fictions” in the middle, introduced with a dedication written to Cervantes, are fascinating shorter confections, featuring a riff on the Noah myth (written from the perspective of his brother) as well as on the story of Jesus’ conception and birth from the point of view of Joseph – but also a story where a man is apparently sleeping with his dead wife and one of a bleak absurdity where a man is forced to repeat a strange sequence of ritual and violence in a train station. There’s no true connective tissue between these seven stories except that they are, as promised, “exemplary fictions” and that they do, as Coover lays out in the dedication, provide a cursory and captivating look at his skills and interests as a writer.

The final story in the collection, “The Hat Act”, takes (to me, anyway) a completely different kind of metafictional twist at the very conclusion. The story is relatively straightforward, albeit fantastical: it shows a magician performing an increasingly strange magic act pulling things out of hats and describing the audience’s reaction in italicized stage directions. When the trick goes violently wrong, nearly-but-not-quite humorously so (I was reminded for some reason of the humor of the Frat Pack or the Happy Madison Gang), the act concludes – as does the book – with a sign reading: “THIS ACT IS CONCLUDED. THE MANAGEMENT REGRETS THERE WILL BE NO REFUND.” Perhaps it’s just the coincidence of putting this story at the end of the collection – but after reading these tales, I don’t think there’s such a thing as a coincidence in Coover’s world. Everything is meticulously placed and planned so as to affect the reader and so I have to imagine that this was Coover’s little note to anyone who got to the end of the collection and found it frustrating, confusing, infuriating even: you got what was promised, even if it’s not what you thought you wanted.

Rating: 5+ out of 5. I love a good brain tease and Robert Coover’s collection brings together some of the very best I’ve ever experienced, all in one package. This is an exemplary set of stories and not just because most of the tales are delightfully mind-bending, but because reading this collection helps me better understand other works. There’s a story in Alexandra Kleeman’s new collection, “A Brief History of Weather”, that I was suddenly awakened to after reading Coover – and I wonder what the next volume of The Familiar or the next time I re-read Angela Carter might bring. I will say this: I’m reluctant to read another Robert Coover story or novel or even to consider rereading some of these stories, because I know that I’ll never have the first experience again. But perhaps, like any good magic trick, it’ll be just as fascinating and awe-inspiring knowing how it ends. Regardless, just remember as you read these tales a quote from Alfred Borden: “Are you watching closely?”