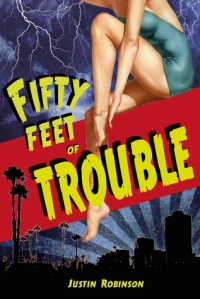 The Short Version: Nick Moss, last human PI in Los Angeles, goes from having no cases to several in the blink of an eye. But what could two missing girls, a missing familiar, and a mysterious vampiric paramour have in common? Knowing this town, more than Nick can handle – and with a fifty foot woman and a Kong involved, boy is that ever the case.

The Review: Sometimes, a simple concept is all you need to make something downright brilliant. So it is with Justin Robinson’s Nick Moss novels (the first, City of Devils, came out three years ago): after World War II, there was another war – a war with real monsters. The Night War, they called it, and humanity lost. Now, monsters of pretty much every imaginable kind are the ones who run the show – and humans, well, they’d just better try not to be out after dark. Moss, the last human PI in Los Angeles, takes that noir loner thing up a notch: he’s not just a dogged PI, but he’s fighting against inevitable entropy. I’m reminded, although their circumstances are of course quite different, of Hank Palace in the Last Policeman trilogy: two men who can’t really help but do their job, even in the face of a world that has changed nearly irrevocably.

We were introduced to that world and I remember feeling utterly delighted by the inventiveness and play that Robinson brought to the tale – and he’s only gotten more assured in this second installment. He assumes that you’ve likely read the first book, but also allows this one to stand alone, not so much reintroducing characters as refreshing them. A new reader might not quite understand (for example) who the pumpkinhead is that keeps arguing over who gets to turn Nick – but they’ll quickly understand the hierarchy of humanity and monsters, who Nick and Ser are, and that’s really all you need. The world has been built, so now Robinson gets to play in it.

And play he does. The cases that Moss pulls this time around, beginning with a missing familiar (belonging to a witch he’s maybe got the hots for), are classic noir stuff – all seemingly different and disparate, but eventually adding up due to an unexpected connection. Not only that, the unexpected connection is an intriguing twist on the “lost family member” story – you know, where someone thought dead or lost or maybe someone unknown altogether has come back in some way and is behind it all – and Robinson manages to pack an emotional wallop in the climax, too. As the reader puts the case together with Moss, they’re never ahead of him (I’m not sure how you could be, frankly) but also never totally lost either; Robinson keeps it all manageable for a reader, which seems like a silly thing to note but when you’re faced with a world so alien compared to our own, it’s a nice way to be treated as a reader.

Part of this is down to the sense of humor that pervades the entire book. Moss is, of course, still the wry screw-up in, again, the classic mold but it’s things like the vampire attorney, the jaguar people’s particular liability when turned on, having dinner with a fifty foot woman, the mad scientist seemingly laughing with a chorus of other people even when there’s no one around, and so on that keeps the reader close. Robinson is simultaneously playing with our expectations (especially if you know your classic monsters) and expanding our understanding. A scene where Moss, at a window at night, interviews several monsters is hilarious and, even as we’re laughing, we’re learning so much about the City of Devils in a way that doesn’t feel remotely expository. Also, what a year for creepy clowns: the Reverend Gigglesworth is one of the scariest (for so many reasons) characters in the book and it felt fitting to sympathize totally with Moss’ fear when, here in our world, all you have to do is turn on the news and there’s been another sighting of a goddamn clown trying to lure children into the woods or something equally horror-novel-turned-reality.

Robinson’s expanded comfort also contributes to a sense of the whole novel feeling, well, bigger. You’d expect that from a second novel in the series, let alone from a novel whose title references the Fifty Foot Woman… but the action sequences feel more daring, the danger feels far grander, and we start to get a sense of the larger world outside of the individual cases that come Moss’ way. I don’t want to spoil the pleasures of the novel, so I won’t illuminate too many details – but I bet most readers wouldn’t immediately expect a novel like this to deal so acutely and intelligently with racism, eugenics/genetic experimentation, familial loss, ‘forbidden’ romance, infidelity, and existentialism. Yet it does, and it’s to Robinson’s great credit that he also transcends his great gimmick of a central idea. Despite the monsters and the derring-do and the humor, he’s still writing a novel that deals with the central questions of humanity – and in so doing, he’s earning himself a place alongside Cain, Ellroy, Chandler, and the rest of the great hardboiled/noir writers. It just so happens that he’s also crafting an alternate world that stands alongside the best fantastical renderings of our universe, and one that (I hope) is infinitely explorable. And that makes him all the more notable, in my book.

Rating: 5 out of 5. Expanding brilliantly on everything that the first novel did so well, Justin Robinson’s second Nick Moss novel is exactly what you want from something that could best be described as “50s noir with monsters”. Robinson has a blast, never drops the ball, and continues to demonstrate a brilliantly & relentlessly inventive imagination – because who else would pit a human PI against a Kong who lives on a Skull Island off the LA coast complete with floating step pyramids brought to him by the jaguar people who run his security? PS that PI got pitted against the Kong by the Kong’s main squeeze, who happens to be a giantess who thinks that a vampire might be in love with her.
If you’ve started to smile just reading this, then consider Justin Robinson’s Nick Moss novels. I promise you won’t be disappointed.