The Grownup by Gillian Flynn
3 out of 5
The Short Version: A young woman on the margins, working as a fraudulent psychic, lands a gig investigating a creepy house and creepy child for another woman. What ensues is a classic gothic battle for sanity.

The Review: Flynn’s voice is unmistakeable and it was great to hear it again, seeing as it’s been awhile since Gone Girl and we’re likely to have to wait a while longer yet for her next novel – even if this short story (barely even a novella) is of questionable efficacy. There are certainly moments of potent terror and Flynn wields her particular strange darkness to ensure that the reader doesn’t really have any clue what’s happening until the very end. But the whole thing, especially come the end, is rushed and every time you want Flynn to sprawl out, dive into things a bit, she just barrels through. It’s not a bad story by any means, and it does provide a fun shiver (especially Miles, a classic Flynn psycho – or is he?), but I’m not convinced it’s meant to stand alone.

The Vanishers by Heidi Julavits
3.5 out of 5
The Short Version: Julia is a student at an elite academy for psychics but after she draws the ire of one of her imperious teachers in the form of a vicious psychic attack, she flees and renounces her abilities. Others track her down though, seeking her talents, and so she’s drawn into an international search for the truth – that might just bring her right back to where she started.

The Review: The first 50 or so pages are exceptional – some of Heidi’s best writing and a smashing entry into a strange and spooky world. And then the book just deflates. There are enough half-formed plots and ideas here to power three books (the psychic academy, the vanishings tapes, the people surgically taking on dead/vanished people’s faces) and the overall story gets far too diffuse by the end in favor of psychological musings about the relationship between mothers/mother-figures and daughters. Which is not a bad thing. I don’t mind authors experimenting with genre – in fact, I encourage it – but Heidi either doesn’t care about or doesn’t understand the rules she set up for herself in this world, and that makes the book fall flat. I’ll always remember those first 50 or so pages, though.

The Master & Margarita by Mikhail Bulgakov, translation by Richard Pevear and Larissa Volokhonsky
3.5 out of 5
The Short Version: One day, the Devil arrives in Moscow and begins to sew havoc across the town. After a few days of disrupting the cultural, financial, and political scene, he and his cadre encounter a woman called Margarita, who seeks her lover (a talented but unappreciated master writer) – and must make a deal with the devil, as it were…

The Review: On the one hand, I deeply enjoyed the silliness and strange joys of this novel – like the Devil’s crew (including a sassy, vodka-drinking, talking black cat) and the narrator’s aw-shucks/carnival-barker voice. On the other, the book takes nearly its entire first half to get going and the interweaving of the story of Pontius Pilate is exhausting. I tried, any time I felt my interest flagging, to consider this book as a satire/critique of Stalinist Moscow and that helped me get through some of the duller points… but ultimately, I was taken by the inventiveness while simultaneously exhausted by the ups and downs of the actual storytelling. The introduction of the titular characters at the halfway mark does breathe some life into the novel and it delivers something resembling an actual plot (as opposed to just watching the Devil wreak havoc – which I was fine with, but would’ve just liked to be a little tighter, narratively) but by that point, your exhaustion may’ve already gotten the better of you. Still, there are moments of sheer virtuosity – like the mysterious apartment complex or the strange ball where Margarita serves as hostess – that will stick with you forever. 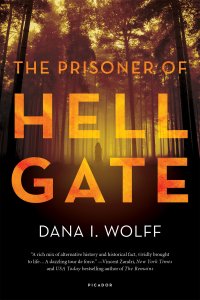 The Prisoner of Hell Gate by Dana I. Wolff
2 out of 5
The Short Version: When five college friends (including the descendent of George Soper) land on North Brother Island, they imagine they’re going to have a silly and slightly spooky adventure. Little do they know, evil lurks on the island – evil that has been waiting there for nearly a century. Waiting for revenge, especially on the family Soper…

The Review: A slasher movie put to paper – or, perhaps more accurately, an episode of American Horror Story put to paper. The prose is overwrought but that feels rather like the point. After all, no one watches AHS for the compelling dramatic tension or the deep character development; they watch for when it all goes bananas. And bananas this book sure does go. The idea is compelling (Typhoid Mary and the ghosts of the General Slocum are still hanging out on North Brother and that’s part of why it’s closed off to the public) but the execution is caricatured to the extreme (never have I ever seen so many characters make truly inexplicable decisions, even in the horror genre) and the overblown language negates any of the really effective scares. Add to all this a head-scratching ending with a ridiculous reveal about our main character… and, well, that episode of American Horror Story that’s waiting on Netflix is probably more nuanced. 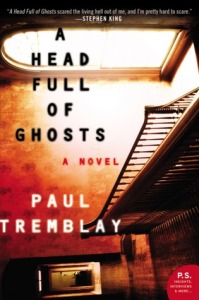 A Head Full of Ghosts by Paul Tremblay
2 out of 5
The Short Version: Fifteen years after The Possession aired on TV, the youngest Barrett daughter (Merry) agrees to speak to a reporter and reveal the truth of what went on behind the scenes. Was her older sister really possessed? Or was there something far darker and yet far more realistic happening to the Barrett family?

The Review: The front cover of this book gets a pull quote from the master of horror, Uncle Stevie himself. So I was expecting thrills and chills and frights… and I got exactly none of those. So perhaps this was a failure of expectations – but also, I think it might be a failure of the book’s central conceit.
We follow three intertwined narratives: Merry’s conversations with the reporter, her flashbacks/actual story to the reporter, and a blog recapping (15 years later) The Possession. There’s a reveal to be had about the identity of that blogger that doesn’t feel as intense as it was made out to be and while there is certainly something that could be called terrifying about the reveal at the end of the novel, it ultimately feels sad and dark as opposed to actually scary. Marjorie’s illness (mooted to be schizophrenia instead of actual demonic possession) isn’t dealt with as well as one might hope and the real core of the novel (or at least the one it seems to gravitate towards most), the fracturing middle class family unit in an America that can no longer sustain a middle class, is only given superficial development. Tremblay has a lot to say: about the media, about blogs, about the failure of religion to modernize, about the decay of the patriarchy, about reality TV and our obsession with “the truth” when “the truth” means “a good story”…
I just wish he’d actually said anything of note about any of it. He even pulls his punches on some of the great scares, moments where Marjorie seems very clearly to be possessed or at least somehow truly fucked up, and so the book ends and you just feel neutral – like it was nothing that important, even though he has important things to say.

A Thousand Mornings by Mary Oliver
3 out of 5
The Short Version: Small poems and moments that largely feature the Massachusetts coastline and the sense of aging in our modern America. Oliver often focuses on tiny moments, but the ones that can be tremendously beautiful when you take the time to consider them.

The Review: Maybe it’s because, since I’ve started to really appreciate poetry in the last few years, I’ve largely read poets of color or younger poets or poets who are bringing a vitality of language to their work that I nearly always found missing in poets of an older generation… but I found this collection utterly forgettable. It’s not bad, by any means, and there are some truly lovely passages and stanzas – it’s no surprise Mary Oliver is, as The New York Times put it, America’s best-selling poet. But that’s a double-edged sword right there, because her poetry is by and large not challenging. It is what the average American who maybe studied a little poetry in eighth grade might considering poetry – but it does not represent the ways in which the form can truly move a person.
Still, even with my inability to truly be moved by this collection, there were moments where, as I read roughly one poem a morning for the month of October, I found myself allowing a certain stillness to wash over me and my cup of tea as I looked at the tree outside my apartment window. So in that regard, it did its job. But, I think I am for more dangerous and exciting poets. Give me Maggie Nelson and Saeed Jones and Ocean Vuong – or even Seamus Heaney.