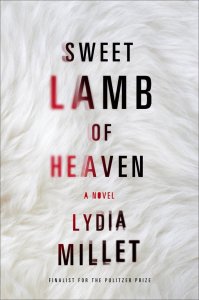 The Short Version: When Anna’s daughter is born, she begins to hear a strange near-constant monologue with no apparent source. Although it disappears after her daughter begins talking, surreality continues to suffuse her world – and when her husband goes from disinterested to malevolent, she flees to the coast of Maine. But there, she discovers that her husband (as well as those around her) might be more than they first appeared to be…

The Review: It’s hard not to think of this book in the context of the last 18 months. Certainly, on a superficial level, there’s the political angle: a disingenuous conservative politician who wants not to serve his community but to empower himself by any means necessary? Come on. But that’s not the point of this novel; rather, I think Lydia Millet wants us to see the character of Ned and the real-life politicians he resembles as symptoms instead of the disease.

“What, then, is the disease?” you ask. By Millet’s take, the disease is modernization – it’s us, consuming the planet and its resources and making things easier for ourselves to the point that we’re crowding out the good in the natural world. This isn’t a climate change thing, but climate change is another symptom. This is, along with Jeff VanderMeer’s Southern Reach trilogy, one of the first great Anthropocene horror stories. And Millet gets her frights in where you least expect them.

On the surface (and by the jacket copy), this book seems like it’s going to be a Stephen King-style spooky motel story – something like a cross between The Shining and In the Lake of the Woods, maybe. And the small-town unease is absolutely there throughout. I was reminded, while reading, of the weekend Dani and I spent out on Cape Cod last February. Coldest day of the winter, barely anyone around… and so you find that you wonder about everyone who is around. Why are they here? What is it that has brought them to this place at such an unseasonable time of the year? Everyone else is probably asking those same questions about you, too – and that is the atmosphere that Millet initially introduces for Anna and her daughter Lena. There is something suspicious about this motel, about the other people around, about the voice that Anna heard before Lena started speaking. We don’t know what, but it sits there and keeps the reader ever-so-slightly on edge while reading.

So I was pleasantly surprised, then, to discover that Millet was presenting not just a Hitchcockian thriller but a meditation on secular theology. The mysterious voice – and I don’t think this is too much of a spoiler but if you want to know nothing, avert your eyes – is (perhaps) a manifestation of language, of the fundamental truth of language that underpins the universe. It’s not religion for atheists; it’s religion for biblioholics. Although Millet leaves much of the let’s-call-it-theory unexplained and only loosely engaged, she gives readers just enough to start thinking on their own. I found it impossible to put this book down and not, even just somewhere back in my mind, think about the realities of it all. The concept of language, not mathematics or science, as the force that binds the universe together – and that we are in danger of destroying or losing as our planet rapidly shifts further into the Anthropocene.

Speaking of spoilers, I can’t talk much more about the voice without also talking about Ned and his interactions with it – or, more accurately, the revelations about Ned’s own particularities as pertaining to the voice. These moments surprised me and twisted the book into something that I’m not sure it was ready to be. There was an element of prologue, suddenly; a sense that, like M. Night Shyamalan’s Unbreakable, this was just the first introduction to a larger struggle and a larger universe. But I can’t imagine that the story is meant to continue (not unlike Unbreakable) – and so there is a jarring quality to the ending of the novel and these fast-and-furious realizations.

That jarring quality is also helped by the way the prose (presented throughout as a cleaned-up and streamlined version of a .doc kept by Anna throughout the story that features both real-time diaristic recaps and later-on reflections) spins out into something rather more unmoored in the last 75 or so pages. In fact, I have a note – “how to keep one’s head on as a reader?” -and it’s a valid question. What has been presented as one thing is now changing rapidly; we’re no longer able to totally trust Anna’s recollections, time effectively dissolves, and the book becomes something much more dangerous and mercurial. It’s a neat trick but I think it works particularly for a certain kind of reader. I happen to be that reader – but I wonder how many others are?

Finally, I can’t finish this review without mentioning the politics again. I finished this book last week and since that time, as seems to be the new normal in our fucked-up, bad-movie-script of a reality, it has both become even more timely and oddly not strange enough. Millet updates the Orwellian totalitarian state to reflect its modern potential: unlimited surveillance in ways that you probably won’t ever discover. Are they looking through your camera? Your computer? Your phone? Actual bugs planted in your domicile? Something else entirely? We live in that state now, whether or not we want to believe it. It doesn’t seem so evil – but nothing like this does, not at first (and maybe not ever). But someone like Ned, someone who is bent solely on personal advancement and who evinces all-but-one aspect of the classic sociopath… someone like that is about to run our country. There might be a hint of the supernatural floating around Ned but maybe he’s also just a brilliantly dangerous man whose brain is bigger than the average bear. Regardless of what the reality is, it’s clear that such a figure is dangerous. Such uncaring and obvious corruption is dangerous.

Would that we could find a voice like the one these characters hear, to guide us through the coming wilderness.

Rating: 4 out of 5. Although the focus blurs (not unlike the artful blurring of some letters on the front cover) at times, this was a strange and fascinating read. It’s not Hitchcockian like Hannah Pittard’s Listen to Me, with the direct constant ratcheting of thriller-tension, but it still has a creeping dread and a spooky strangeness that could, instead of Hitchcockian, perhaps be better called Lynchian or even Kubrickian. Plus, Millet writes not only excellent characters and wonderful plots but equally brilliant theory that gets weaved into the whole, creating a religion-for-readers theology (if it can be called that) that I deeply loved. It’s a strange book and perhaps ultimately a light one – but read it on a dark, gray winter’s day (perhaps in a town emptied for the season) and you’ll be right where it wants you.