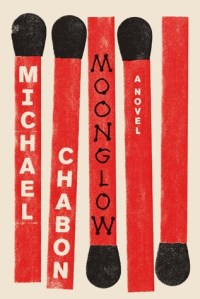 The Short Version: A young man named Michael Chabon sits with his grandfather in the weeks before his death, hearing stories about his life. He takes these stories, in turn, and creates a narrative out of them – but, as he expresses at the beginning, the reader might do well to question how much is true and how much is fiction…

The Review: The trickery begins before you’ve even started reading the book. Open it, flip page by page – you’ll notice that there are more title pages than you’d expect. But I don’t think that extra title page and second dedication are misprints; instead, I’m pretty sure they’re an early wink towards the fact that this novel is not what you think it’s going to be. Chabon is creating the nested metanarrative right from the beginning, almost before you think to be on guard for it. He doesn’t wait, though, before then announcing that he has played fast and loose with the history in this book, making things up when it suits him but otherwise offering total fidelity.

What, then, are we to make of this? Is this novel Chabon’s attempt to hip to that latest literary trend, autofiction? Is it a memoir that got carried away? Could you read it as a memoir – or as complete fiction – and not be wrong either way? The answer to that last question, at least, is yes: Chabon clearly wants readers (before they do any googling, at least) to make up their own minds about what they’re reading. Because while some things feel too narratively good to be true, there are plenty that could easily be the truth – and so the reader needs, to some extent, to make a decision.

Chabon makes it easy, however, because he’s written his best book since Kavalier & Clay. I might even, on the inner ranking sheet of my heart, prefer this book because it has such a small and honest heart, it is more playful, and it seeks to be less than that Pulitzer-winner clearly sought from the outset. Here, Chabon seems to be delighting in telling this story and there’s not a lick of self-consciousness to be found on the page. His prose dips and soars like an Estes rocket, putting a smile on even the most hardened of faces. Lines like “She was always threatening rain; he had been born with an umbrella in his hand.” feel like they ought to be clichés but instead they just feel delightful. Plus, he’s not afraid to be colloquial and honest, culminating in maybe my favorite quote from the book: “My grandmother would freak you the fuck out.”

This is also one of the few stories of the Second World War and the trauma of being Jewish at that time that felt like a new tale to me. Often, we sort of know what we’re getting when we pick up a Holocaust tome or one that deals with Jews acclimating to America in the post-war era – hell, Chabon himself has made great hay out of exactly those stories. But here, the Judaism of these characters seemed to only inform, not define, and so the story lifts out of the Jewish experience and speaks more broadly to the great tragedies of that time on both a personal and species level. The scenes where Chabon’s grandfather and other soldiers arrive at the Mittlewerk are harrowing in their honesty and simultaneously deliver that personal/universal dichotomy of feeling, a sensation that is heightened when Chabon directly references the only other book I’ve ever read that talks about that site: Gravity’s Rainbow.

Chabon might be writing something personal here that we all, on some level, experience – and that we all, Chabon included, believe to be mythic: the story of our ancestors. The story might be entirely personal and in fact it often is, full of details that matter only to us (and sometimes not even then) – but that doesn’t matter, because it is the story of where we came from. The Greeks invented gods to explain away the world around them but also they raised their heroes to the level of gods (or at least demigods) – and that’s what we do to our parents and our grandparents. Even if you dislike them, you’ve still raised them beyond the level of ordinary humans in your own narrative. And so Chabon, here, creates a portrait of two people who he clearly idolized in life (his grandfather and grandmother) but allows his portrait to be as big and surreal as he might’ve painted it at age 8 as opposed to age 50. The scenes of his elderly grandfather courting a widow down in Florida are silly and humanizing even as they continue to build the legend of this man, a legend that is strengthened by the telling.

Rating: 4.5 out of 5. Although it runs to seed at times, Chabon’s novel is the kind of engrossingly chunky American novel that used to be a bit more reliable – in the heyday of Franzen, Eugenides, Chabon himself, etc. All those white literary men who, as it turns out, maybe aren’t so great as we’d made them out to be. So what a joy to discover that Chabon still has it in him to write something that is great, not because it seeks greatness but simply because it is. This is a warm book, full of heart and love and curiosity, and the fact that it manages to do something new both with a 20th Century Jewish narrative and an autofiction gambit makes for impressive and lovely reading. Let this one wrap you up, if you have the time – it won’t change your life, but it will make you smile.